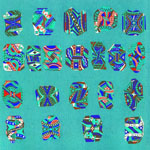 Post-millenial lo-fi pop experimentation unwinds itself from its categorical contortions and comes to something of a head on Black Fiction’s Ghost Ride, wherein Hayden gets softly amphetamined and kicked in the junk, Beck’s former self dons a cape and mask and smokes a toke of medicinal mary jane, The Unicorns lose their ADD; wherein these comparisons are easily made and easily discarded, wherein relative inhibition and dirty sound fetish exploitation get conjoined and make a screechy, soft, bip-bappy, iridescent hyphen of a record. Say word to the in-between.

“You Can Find Me” is a blues-form exegesis on guitar and vocal line repetition, and, as such, thanks but no thanks. Most tracks here follow suit to some extent; they’ve got two or three core ideas apiece embellished with candlelight and static, and we watch Black Fiction stretch, noodle, boil, sauce and then serve with a bottle of sangria. The palate can be pleased, but parts of the taste remain deprived while the stomach weighs heavy. Even as it swishes around everything woozy and off-key, “Black Fiction” has one simplistic, cheap melody to throw down our gullets. There’s nothing to “get,” don’t worry. Chew quickly, pick your teeth later. For dessert you’ll have a scoop of Animal Collective.

Unless. Unless you pay too much attention to the opener, and you start to wonder about what corn and sardines have to do with this “great mystery” that’s processed and canned with a “shaky, unsteady hand,” all as a whorl of Dust Brothers drums and creaky treble duke it out for space in the ear canal. Then think if the “shaky, unsteady hand” is the same as the blessed “Magic Hands,” which, by the way, sounds like Yo La Tengo confined to a closet recording room. “Ghost Ride” is Rogue Wave in an echo chamber; don’t think hands get mentioned, though. The sloppiness of “Carry Him Away” makes its refrain, “music is a terrible thing,” sound both convincing and insincere.

So it’s a bit futile trying to salvage this textual scrap yard, to pull back together this tangle of threads, this slop of spaghetti, but savor the bites. The dumb nascent Beta Band groove of “I Spread the Disease” underpins some sparkling, lilting, tropical dusk melodies that become indelible through the same repetition that renders “You Can Find Me” forgettable. On “Disease” layers, tone, and prismatic prettiness surpass the limitations of foregone structuring. “Something Else” is a muffled rhythmic stomp of tin drums, diffused bass belches and swirling chime cascades coming from the room over. The tune’s gorgeous, if sweetly mangled and veiled. In Ghost Ride nothing escapes the sickly sheath of gauze.

True, Black Fiction’s music is the nursing of burnt-out husks of frail and dying styles. The goal, though, isn’t health; that end would undo the music’s very process. These guys are practitioners of weakness, painters of the barely there. Turn the volume up on Ghost Ride and let your ears squint right through it.