1. Hit The Heartbrakes
2. Partie Traumatic
3. Listen To Your Body Tonight
4. Hurricane Jane
5. I’m Making Eyes At You
6. I’ve Underestimated My Charm (Again)
7. I’m Not Gonna Teach Your Boyfriend How To Dance
8. Love Me Already
9. I Wanna Be Your Limousine
10. Look At Me (When I Rock Witchoo) 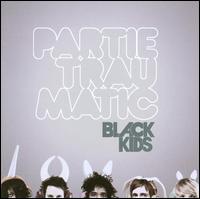 Whimsy, apparently, has died. At the hands of the Black Kids, too, it seems; they’re damaging “fun” music as if they hate the very notion, constructing ear-piercingly inane tracks under the guise of terms like “danceable” and “harmless.” It’s something like filing the peddling of cigarettes to eleven year olds as “good business tactics”—does it offend you, yeah? Yep. It’s just not okay Black Kids: it’s not fucking okay.

The lead single, “I’m Not Gonna Teach Your Boyfriend How To Dance,” soaked in high fructose corn syrup and mascara, melancholy glee presumably meant to provide horny adolescents some soundtrack for wallflowering at middle school dances, is plainly barfable, all empty synths and whine so vacuous it threatens to create a black hole. “I’ve Underestimated My Charm (Again)” rides a pseudo-surf rock riff into oblivion, subverting it with chintzy percussion and throaty wails before just deciding more everything would be the appropriate direction in which to take the track, so: popping drums, clanging guitars that intersect each other at troubling points, pausing a moment for an obligatory “female vocal chant” section, then leaking faux-propulsion via stupidly simple chords accompanied with half-assed harmonizing that amounts to a few overdubbed “whoa”s. This haphazard approach of frantically chucking any found (and thoroughly exhausted) sound at the wall and watching it not just fail to adhere, but actively bounce off the wall back into the band’s unfazed faces as they brazenly believe it to resemble something like success is as good a summation as any of Partie Traumatic‘s porosity. Oh, and “Hit The Heartbrakes” takes on the perspective of a poltergeist haunting one’s underwear. High-concept artistry such as this doesn’t help either.

All of this is something like bizarro-New Order—in the sense of being maudlin “dance music,” trite and inconsequential—all awkward poses and bad haircuts and something approaching sass in place of, well, music, which I could perhaps twist into some statement did I not know this record to be entirely devoid of message or intent. It’s all a damningly stupid exercise in projecting an image of being a band but in fact being a collective of bland archetypes constructing some horrid noise built from wasteful exhalations and compositions culled from some vague history of dance-punk outfits that surely would’ve aborted their offspring had they known they would be this violently ugly.

In other words, everything is wrong: this is not how their “brand” should be translated; and it is a brand, a major label representation of what indie kids are dancing to or have been dancing to, enjoyably, ecstatically, since before the Kids were born. If it offends you it’s because you feel misrepresented, and I’m with you in that. Of course, this is nothing even remotely new, but very rarely does it come off so obnoxiously, indelibly built to not be taken seriously when that’s the very action that could save these assholes from their own doom.