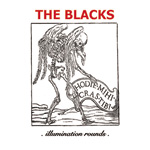 CMG staffer Craig Eley did a fine job of introducing the Blacks' new album, Nom de Guerre, so if you want to get all intellectual and stuffy about the heart and soul of this band then peruse his review when you're done with this one. For my part, I'll just stick to the basic facts: while 2007's Nom de Guerre is a solid full-length debut, Illumination Rounds holds the slightly more stunning distinction of being one of last year's best EPs. By all accounts and as far as I know, it does the two things EPs are supposed to do, like get you excited for the shape of things to come and stand on its own as a short yet powerful statement. Indeed, this three-song collection shares one track ("The Flame") with the LP but its two other tracks ("Illumination Rounds" and "New Man") rival anything else in the newest batch, save for the excellent "The Split."

The Blacks are minimalist rock n' roll, punctures of noise full of late-'80s and early '90s come-ons by way of the Pixies and L7. Head-honcho Luisa Black shreds the guitars and vocals while her hubby, J D K Blacker, exacts an atomic focus on hand claps, tambourine, backing vox, and dancing. Guest Black, Charlie Knote, steps in on drums. The thing with minimalist bands is that they get us thinking how they might sound with a bassist here or a keyboardist there. (Don't tell me you've never wondered about the potential awesomeness of an augmented White Stripes lineup with a garage-soul bassist and a dirty-ass Rhodes player that aren't in the Raconteurs. Cripes, the allusions are too easy.) Fortunately, Illumination Rounds' spare arrangements are far from asthmatic, never feeling like forced genre statements and only clocking in at nine fucking minutes, great to throw on your playlist when your friends call to say they'll be over in ten minutes to pick you up en route to the bars. Because this record is as fun and time obliterating as downing a line of rapid-fire shots.

"There's a light in the corner where a man used to stand / He offered me salvation--I gave it back." So opens the lead track, "The Flame," a slow rocker with moping distorted guitars, the closest this band flirts to balladry. It's an appropriate starting point; Ms. Black's first words speak like an elegy to her past life, a final goodbye to everything she walked away from -- in this case, her role as lead guitarist in the underappreciated late-'90s group Glitter Mini 9 -- before donning the stark wares of her new band. She moans with the sarcasm of someone who went through all of the shit of whatever decade still haunts her.

Goodbyes out of the way, the band kicks more familiar gears on "Illumination Rounds." With a guitar riff resembling the Stray Cats on meth, vocals channeling Karen O affectations, and handclaps so deep they come off like Gestapo boot stomps, who the hell doesn't want to dance? Call it muddy production but I prefer to just call it some dark-ass shit, especially with the Black's lyrical discourse positioning the band as a passionate but pricey one-off fuck: "I took it like a lover / I took it like a man / Five hundred by the hour / High school style in the back of the van / Oh baby there's an earthquake in the sand." It's just so grimy and too damn good to pass up.

"New Man," another pairing of pummeling guitar chops and street-wise sassy vox, hits its stride with Black's deadpan verse delivery--"I've got a new man / He's worth a million in prizes"--and a chorus chord-riff built on a fist-pumping nod to the Pixies' "Gigantic." And it seems like there should be more but that's it, this EP is over. Three people x Three songs = Nine minutes. A shotgun shell of crapnel spread all over yer face. Now leave: your friends are waiting outside with the tremors.