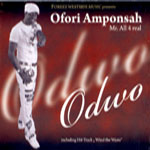 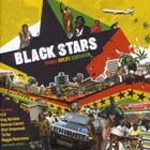 The last release from Out Here Records was the absolutely gorgeous Segu Blue from Bassekou Kouyate & Ngoni Ba; released last year when I was in the midst of coding the new site I never got a chance to review or promote it so let me just say it now: fucking amazing album. Also interesting: while that album was folky and mild, this new offering from the label is equally awesome and entirely different. Black Stars is a compilation of Ghanaian hiplife artists, their music a wild fusion of hip hop, highlife, reggae, and dancehall. Also: it’s really, really fun.

Highlife originated in Ghana in the 1920s; I’m going to drastically reduce the history here, but for those of you unfamiliar, it’s not quite the same as Nigerian afrobeat (though afrobeat king Fela Kuti started out as a highlife artist), though it relies on many of the same ideas: dual guitars, horn-led grooves, and elongated songs. Highlife dominated English-speaking West African culture for years. When hip hop slowly began to take root in the country in the 1980s, however, the character of undergound highlife began to change as well. Hiplife has been around for about ten years, but recently it has become incredibly popular, both in Ghana and throughout Africa. This particular compilation is easy to recommend; the tracks selected are all amazing (which makes sense given that Out Here was able to pick and choose from a thriving musical movement that has had little representation stateside).

The various tracks here cover a lot of ground: not all are straight mixes of hip hop and highlife, some feature reggae influences far more obviously than others, some sound like more traditional highlife while others continue the efforts of highlife musicians in the 1980s and 1990s to add synthesizers and electronic sounds to their music. The sequencing on the album is great; mood-wise we get a vast array of tracks: club anthems, introspective roots reggae-inflected pieces, modern highlife numbers, and hip hop tracks. Many of the artists and their collaborators seamlessly merge those ideas mid-track. Terry Bonchaka’s fusion of ragga and hiplife on “Lomna Va” is an excellent example, ragga beats cutting under sped-up skanks and programmed bass riffs that skirt the boundaries of hip hop and fusion. Tic Tac’s “Kangaroo” takes Bonchaka’s raglife further, adding raps and more complex melodies. Sheriff Gale’s “Illusions” is more roots reggae; it’s a thick, claustrophobic track that offsets the more upbeat fare elsewhere.

Ofori Amponsah’s gorgeous club track “Abelle” deploys dancing synths and vocals over modified reggae riffs and highlife guitars. It’s a brilliant distillation of a whole slew of musical ideas—the kind of shit M.I.A. is constantly going for. The hip hop tracks are really good too. Pidgen Allstars’ “Toto Mechanic” is a weird mix of old school hip hop beats, techno, glitch, and samples. QDL’s closing track is the straight hip hop take on hiplife; the sample in “Now Til Da End” is fabulous, and QDL does all sorts of stilted flow things that are great to hear.

Elsewhere the hip hop is more folded into the layers of music. Opener “Modern Ghanaians” features several rapped verses over traditional highlife rhythms and samples. Artist King Ayisoba sings in broken English, apparently as a joke, and it’s easy to read the track as a sarcastic look at postcolonial life in Ghana. Batman Samini’s “Do Something” follows; it’s a fabulous track that merges dancehall, highlife, and hip hop while it puts a much darker tone of the happier highlife rhythms that dominate much of the album. V.I.P. take that fusion further, flipping some Paul Simon flipped-shit on its head to come out the other end with the nauseatingly joyous “Ahomka Wo Mu.”

It’s a fabulous compilation, in short, especially if you have any interest in modern reggae or highlife. It’s my party album of the year so far, and on an unrelated and simultaneously related note it also features a massive book that gives all the history of hiplife and these artists. Dancification and edification? Imagine.