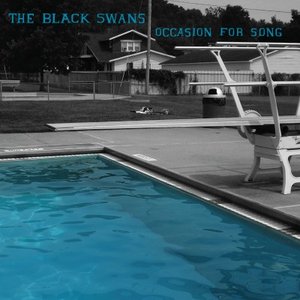 The Black Swans’ Occasion for Song reminds me of a record I wrote about last year, Dum Dum Girls’ Only in Dreams. Though vastly different in genre and tone, these two records retain a laser-like focus on one emotion: Grief with a capital G. Each is an album made in remembrance of a recently departed loved one, and for the Black Swans it’s former band violinist Noel Sayre, who died in 2008 when he had a heart attack while diving into a swimming pool. While Dee Dee of Dum Dum Girls wailed her way into catharsis, the Black Swans take a different approach. Occasion for Song is a hushed, subtle collection of songs whose sonic restraint belies the almost unbearably naked emotion housed within the lyrics. Though it rambles on a bit long and tends to feel static at times, it’s impossible not to admire Occasion for Song for its deftness of feeling and genuine beauty.

Occasion for Song delivers its first punch in the gut before one can even take it out of its sleeve: the cover art is an empty swimming pool and diving board, presumably the spot where Sayre spent his final moments. It’s grim imagery to match a record that doesn’t shy away from dark places. The music itself is somewhere along the lines of Lambchop or John Cale—a lonely, country-tinged Midwestern sound complete with harmonica, organ, and banjo, and the record’s best songs project a woozy, dreamlike quality that meshes finely with the weighty subject matter. Vocalist/guitarist Jerry DiCicca has a terse, plainspoken style that recalls Cale or Lou Reed, which can be a bit frustrating, as he tends to the inaudible and barely there, even at a song’s climax. Occasion for Song varies from naked guitar to a full band sound, and the latter is what makes for standout tracks like “Portmouth, Ohio,” “Daily Affirmation,” and “Where Are You Tonight?” These highlights are juxtaposed with some draggy moments, particularly the seven-minute “J.D.’s Blues” which is too low-energy to be the record’s centerpiece, despite its characteristically heartfelt, evocative lyrics. The last few songs of the record flag similarly, indicating that a simple edit here or there would make Occasion for Song significantly tighter and more impactful.

That said, there’s no denying the clear-eyed, introspective beauty of the words on this record. “Portsmouth, Ohio” is the big-ticket song, the one that sticks with you once it’s over. It’s also an almost excruciating exercise: a play by play of the day their friend died. DiCicca sings gently on the refrain, “Nobody’s supposed to die / Three days before the 4th of July / Especially when the sun’s still in the sky,” and organ swells up in the background like a distress call. While other songs are less specific, grief rears its ugly head somewhere in each, often straightforwardly, as in “Basket of Light”: “It’s been a long while / Since I’ve seen you smile / And I want to feel your warmth again.” DiCicca’s appeal as a lyricist lies in his ability to paint clear, familiar scenes that, simple as they may be, take us to an emotional place. For example, “Basket of Light” offers: “I could hear my friends laughing/ While I was still in bed / They were drinking coffee, telling stories.” Likewise, highlight “Where are You Tonight?” expertly evokes a bleary late-night scene: driving around, smoking weed, missing a friend.

Though it would seem from these examples that Occasion for Song risks becoming a broken record of repetitious grieving, there’s a lot of nuance explored here as well. Many of these songs mine not only the event itself and the state of grief that follows, but the process of overcoming, of changing one’s thinking and distracting oneself from the depths of depression. There’s quite a bit about nature woven into these songs; a zeroing in on the beautiful details of daily life (wind whistling, “potato bugs dancin’ on my thigh”) that can help us through when the big pictures gets too intense. On “Daily Affirmation,” probably the most upbeat of this group of sad, sad songs, DiCicca pinpoints his own negative thinking in an attempt to turn it around: “Butterfly is just a pretty bug / Escargot is just French for slug / Some people look on the sunny side.”

There’s nothing but clouds on Occasion for Song, but rather than uninviting it’s eminently listenable; an unflinching, graceful, truthful exploration of how to go on living when you’ve lost a friend, of how to recognize a world that suddenly seems that much darker and less hopeful. It seems fitting that career musicians like the Black Swans would mourn in this way. And in so doing they turn what should be an unbearable heaviness into something surprisingly freeing.