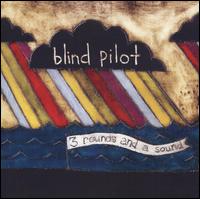 3 Rounds and a Sound

Skimming through thousands of press releases, one sheets, and publicity e-mails packed with burnished adjectives strung together five or six abreast seems to have endowed me with the ability to plop a given band down on the spectrum of marketability after reading only a few clippings of their press. Doubtless, you too are well practiced at this form of categorization. Like when a movie trailer announces in shimmering letters that it is the NUMBER 1 MOVIE IN AMERICA followed by a litany of “exhilarating”‘s and “high-octane”‘s and “Christian Bale”‘s each with an 8-point font attribution to Ain’tItCoolNews.com.* We all know that that movie is G.I Joe: Rise of the Cobra, right? PTA doesn’t put out trailers that match this description.

Press releases lay themselves down according to the same logic, and by that logic the future of Blind Pilot is bright indeed. I’m not going to place too much credit at the feet of my intuition here, some of that future is written already. 3 Rounds and a Sound recently celebrated its first birthday, Pilot has shared stages with fellow Oregonian success stories the Decemberists, and the critical reception to this point has been the kind of consistent and understated groundswell that bespeaks quality more than hype. But it ain’t a party until the Glow weighs in, so here we are a year late in a wrinkled blazer palming a few pints of Thunderbird. Congrats, Blind Pilot, your shit is certified legitimate.

There’s a reason that I decided to review the album at all, despite the apparent staleness of the subject and the fact that my lone voice will add little to the aforementioned chorus of praise. Simply stated that reason is because 3 Rounds and a Sound is a good record, and recognizing good music is what we do here, and we don’t do it or refrain from doing it simply because other outlets have already voiced the same opinion. So in spite of its age the record warrants a review, and a positive one, because not only is it good but it’s good in a way that—much like flying a plane while sightless—is a particularly tricky feat to pull off.

Israel Nebeker’s debut doesn’t preach calm but it is calm and calming. Too calm, in fact, to preach anything but the art and ceremony of chilling the fuck out. Often this calm is an edgeless and tangible whole, a found object. The instant of stillness and dark on the streets of a cathedral town in northern Spain just after the clock strikes four. That’s “Oviedo.” The inexplicable certainty of youth that frees you. That’s “One Red Thread.” But calm on this record is more than the object of a few songs, it is the mood that informs the entire listening process. In every track Nebeker’s vocal delivery is stolid and unhurried, the instruments mesh gracefully into each other, and the melodies unfurl languidly like a long banner in an afternoon breeze.

Now, bands that attract descriptors like “calm” or “buttoned-down” or “folksy” are hemmed in by pitfalls in every direction. Don’t unbutton enough buttons and you’re boring (Wilco), unbutton too many and you indulge in noodling wankery (Phish). Direct your pillow-soft aesthetic to the travails of romance and you’re Pete Yorn, gape passively at the mystical beauty of nature and you’re Jack Johnson. It really is a tough spot in which to find oneself, the last unpainted corner. In the pantheon of indie pop/folk line-straddlers I’d say that Blind Pilot takes a looping, handwritten page from similarly gifted Rogue Wave, only Nebeker opts to draw his influences more directly from the right side of the backslash whereas Zach Rogue favors the “indier” phrasings. What truly impresses is that instead of fretting about the constricting effects of the genre’s other practitioners Blind Pilot advances, as musicians must, in all directions with a fluid dexterity that allows them to evade the bear traps of cliché and self-serving abstraction.

This calm is born of effortless confidence, it is not a beard for artistic laziness or a default affectation put in place to solidify a morsel otherwise indigestibly arcane. This calm is the breeze that unfurls the banner, and it’s clear from this collection of tracks that Nebeker’s enjoying it as much as his listeners. And why shouldn’t he? He’s on his way and he deserves to be. I knew that much before I even pressed play the first time, as soon as I skimmed the press quotes. Blind Pilot’s tenure in the file marked “No Big Hair” will be brief.

*As a completely unrelated aside that cannot pass unremarked upon: when I typed in the URL to Ain’t It Cool to verify that it was, in fact, a real thing, the front page banner proudly advertised the availability of two (2) “World’s Greatest Dad” posters autographed by Robin Williams and Bobcat Goldthwait.