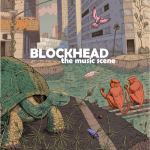 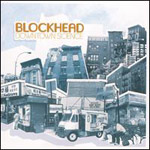 It seems like Blockhead knows how to keep himself grounded; with Aesop and Def Jux, with Murs and MUSH (ya know, not together), with Slug and more, ‘head’s been eclectic and satisfying propped up on meticulously choice samples and traditional showiness. Far from a neglected cast member in most of his collaborations, Blockhead’s become something of a deferent voice, from producing the majority of neon Necropolitik tracks on Labor Days, to recently adding two solid beats to Cage’s Hell’s Winter. Before Science, he’s gone like, “Right, Ninja Tune gets the ethereal and—snicker—‘emotional,’ Def Jux, the MCs, they get the ebullient soundtracks to almost-post-War cop movies, and MUSH gets, like, the hardcore, raw breaks.”

So, Downtown Science, Blockhead’s new LP for Ninja Tune and second full solo (it includes a DVD of video for each song from his debut, based on a contest set up by NT: this new album’s better), works towards consolidating each of the man’s personas, but like the burden of a student loan payment, expectations can be a bitch. What Blockhead has done is compose a themed album of loyal genre samples and cymbal-coated snares united by studio patience as clichι as it is sexy as it is predictable as it is rollicking. “The Art of Walking” is blueprint enough, because outside the lunkheaded name and the breadbasket of Stupid initial seconds, which lay out the “low,” “middle,” and “high” of studio production in case you’re a moron, the bass is fine jell-o and the beat is bouncy; the samples, a carnival wobble and clipped horns and all manner of pitchshifted soul, find tired trenches under Blockhead’s flare, but they all just sound so fucking smooth.

Blockhead isn’t a doofus, and he mostly demonstrates this fact through the unexpected choices in samples he brings to the rudimentary hi-mid-lo setup. “Good Block Bad Block” storms in leopard print and power chords, shunts mid-stroke to a strange typewriter byte beat and a sylvan flute. The song, a tad out of its element among the other sultry, less biting arrangements, flaunts crotch forward, Jethro Halen, flitting Eddie Van Anderson, an unholy communion complete with Gregorian wannabes. Fucking smooth.

I’d go as far as positing that this album’s about the Romanticism and Eroticism post-Gilded Age cities represented, filtering the parts of each ideal—the crooning, the scatting, the brass fornication, the wet gutters, the spaghetti western whistling—into a modern niche. We may live in a different society from the one that was so easily seduced by the Future, but, Blockhead could be saying, the pieces are still here, dusty but just as destructive. The record’s cohesiveness, thicker than an overall attitude, is a thematic consistency that lends heft to some of Blockhead’s windier stuff. “Crashing Down”’s dry beat and dry guitar chords don’t sound so bad following a dapper vocal sample filled with valentine love, or bookended by a conspicuous harmonica. “Quiet Storm” actually starts to…do…something when a banshee chorus breathes fire in the last minute, behind floored bass drums. “First Snowfall” is IDM pretty, but as exciting as that phrase, sniffling and creaking and then over. Really, here, Blockhead’s songs are never truly weak, some are just faceless, foggy facsimiles of the album’s first, marvelous three.

These opening cuts not only introduce a squeaky, possibly licentious couple falling in bed and then in love, but Blockhead pulls out all stops, filling the songs to the brim. A juicy string bass section propels “Expiration Date,” and “Roll Out” adds a sickle, making the female vocals and string samples as mobile as possible. The parts sound right, sound homefried, because Blockhead puts things where they belong, and if you’re not paying attention, he’ll purposely cycle an especially intriguing part right around the crown of your skull. “Serenade,” restrained and terse, cops its melodic pulse from a fantastic vocal harmony, but one can’t help believe that it works because BHead wants it to. Sorta like how “Cherry Picker” has that piano line that’s annoyingly familiar but probably esoteric per usual.

On headphones, such is a compelling listen. Anywhere else, such is sometimes ambient, mostly danceable, always shaken. Dancing doesn’t have to shock, and neither does love, so Blockhead’s crafted an electro-pop tuxedo without the electricity (to power the seat warmer and cuff lasers). Still, Downtown Science goes deep, swiping at something more than the sum of its parts, intriguing enough to rewind in order to get all of the manic hi-hats in, say, “Stop Motion Traffic,” or to follow the doo doos correctly in awesome “Dough Nation.” Or something.

I say, I already miss the nascent boing! of “Fast Cars” or the flighty tumble of “Too Heavy For Cherubs,” and as relatively inconsequential as these tracks may be to Blockhead’s oeuvre or those MC’s careers, they point to what’s so tricky about this LP. Dude sounds old, wisened, wearied by his contemporaries while refusing to let go of sure-fire theorems. You’ll like it, but it won’t devour your starsystems…and devouring starsystems is what I think needed to happen.