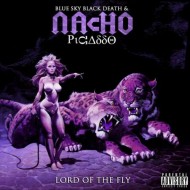 Lord of the Fly Mixtape

Rare is the type of second chance Seattle’s Nacho Picasso and production duo Blue Sky Black Death have—after their largely overlooked and largely forgettable For the Glory (2011) collabo mixtape—with the release of sequel Lord of the Fly; even rarer is how redemptive this sequel is, how it picks out and puts on blast all the faults of its predecessor to re-submit a more flawless replacement with the intent of wiping out all memory of the first impression. Though far from perfect, Lord of the Fly succeeds because it does everything For the Glory did but better: better beats, better raps, better focus, better editing, better title, better cover art, all the fruits of only, say, six months of growth and one more album of familiarity between artists we should now hope continue working together.

Nacho Picasso is hardly a rapping luminary, instead a smart-ass who lacks any narrative or big picture ideals; whether that’s due to apathy or a general inability, his style is pure stream of thought. His Id, in other words, is undiluted, occasionally drifting into gross-out and seemingly pointless-for-the-sake-of-it lyrical moments—but those moments are fewer and farther between on Lord of the Fly than on anything he’s done before. Rough though he still is, Nacho’s cleverer than he lets on, far more lyrically nimble than his sense of humor may predict—“I’m going balls in like I’m stuffing cannons”; “Give my nuts a little space like Hammer pants”; “If I can’t reach Ima stand on a bitch,” etc.—and casts all his dead bodies and zombie shit in a more palatable, tongue-in-cheek light (see “Tutankhamun” for example, which runs as head-first into graphic subject matter as most Odd Future’s output, but Nacho Picasso takes on the role of a mummy, which subtly justifies itself with a dash of creative narrative, not content to simply lean against a shock factor crutch; also, the “[w]rapping” pun is a nice touch).

On the other hand, Picasso’s partners Blue Sky Black Death’s transition between this and For the Glory is far easier to trace. In fact, it wouldn’t be too far-fetched to suggest that whatever improved on Nacho’s end could be attributed to BSBD giving the MC backing much better-suited to Nacho’s style. For the Glory is a detailed, complex, eclectic clutch of rap beats—which are all adjectives one wouldn’t attribute to the frog-voiced, monotone Nacho Picasso. Often unable to give some variety or gravity to a song when, say, a pan flute or sitar floated into the frame, having neither the dexterity or playfulness to properly address it, the rapper now sounds fitfully at home. Gone are traditional instruments—save for a well-placed Mark-McGuire-esque guitar shred or two—replaced by clicking drum tracks, ocean-deep bass, and moody synths. Replaced, actually, with witch house. Which works: surrounding Picasso is now a thick, bitter haze of cloud rap ambiance a la Clams Casino, the prickly fog not only complementing Picasso’s style but serving, sometimes, as his subject matter. The sheer gorgeousness of a beat like “Naked Lunch” could succeed simply on its own.

More often than not, though, Nacho Picasso and BSBD fit together hand-in-glove. On “Greek God,” BSBD slowly roll into the listener’s ken like a quickly advancing fog, the beat building from a shimmering haze as if it were an elaborate entrance for the titular deity. Picasso, showing some of the nerdiness that probably inspired “Marvel” on For The Glory (or that led to those album cover choices), reels off a hilariously accurate narrative about playing Zeus, spitting, “Hera is my wifey, Aphrodite is my mistress / Coldest nigga out here, let Apollo be my witness / May lightning strike you down if your name is on my shit list,” with all the self-satisfaction of someone who rules the universe. “Tool Man” eases into a few tinkling cymbals and a looping keyboard sample before rushing into a synth-driven apex at the chorus, while Nacho gives a breakdown of his style—“I preach free drugs, free love, hippy things”—why he dislikes Odd Future’s style—“Set the girl free / Why you wanna jail her? / I just wanna nail her / Tim ‘the Tool Man’ Taylor”—and what makes him better than them—“If I’m shallow then blow me in the deep end / She ain’t quite a dime, Imma squint my eyes and pretend.”

Highlight is “Tree Tops,” when BSBD pull out an absolutely game-changing beat, synths feeling like waves lapping at a shore, the organic rhythm exploding into ecclesial bliss in the chorus. Picasso pulls out some impressive lines which basically sum up the morbid/goofy interplay of the album—“Teen Hunger Force, we beef like Meat Wad / At a peek, dawg, I look like a Greek God / Peach schnapps, cheap broads out my tee tops / And I’m stuck up like kittens in tree tops”—but his best moment is one of inaction. Rather than having a lyrical refrain like every other track on this album, Nacho chooses to instead let the beat chill, basking in the excellence of what BSBD is so obviously doing without him in the way. Which pretty much encapsulates the difference between For the Glory and Lord of the Fly: the team finally knows how to bring out the best in one another.