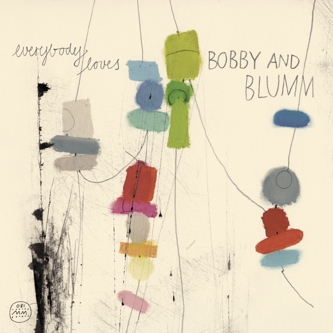 Everybody Loves Bobby and Blumm

This would have killed in 2003, sitting blithely next to George, All Your Summer Songs, and Cyann & Ben. And it’s amazing to me how seriously I mean that, in the sense that this kind of sound suddenly has a history to it only four or five years on.

Well: Bobby and Blumm aren’t quite that simple. This is guitar music moreso than folk, slightly glazed in the long wake of the Books and other acoustic-electronic innovators. F.S. Blumm is a classically trained guitarist; here Ella “Bobby Baby” Blixt’s voice is piled on top of electric hollowbody and the occasional piano. It’s sparse music, to be sure, but even with all that space (like George) melodies pucker through the flat surface, whether with Blixt’s vocals or with the occasional solo from stretched organ reeds or other keys.

The title probably makes this sound more twee than it is, though that descriptor might not entirely be off base. With a song like “In Future Present” we can definitely hit those sounding boards, though even then there is this steeped melancholy (even darkness) that runs beneath the more hopeful/playful melodic passages. If everybody loves Bobby and Blumm, that love is kind of hard and painful and slow; we’re all in our bedrooms alone getting sappy.

Maybe it’s the guitar tone? “Draw a Bow” is one of the better examples of how carefully EQed the whole thing is, but it’s there everywhere: thick plucked bass notes thunder and shift the tone beneath crunchy high register finger picking. This is the type of guitar work you normally hear from an acoustic, but like, say, Charalambides, the use of the hollowbody gives these subtle thumb-and-finger patterns seismic quality. Blumm’s playing is always fascinating, a mix of traditional finger-pick patterns, jazz flourishes, and innovative sweep patterns that give this music a buoyant quality that belies the tone of his guitar.

Blixt’s vocals are gorgeous, though I’m not sure after listening to the album several times I have much of a sense of what it’s about lyrically. “Like a Frog” seems to point to deliberations on the role of public space and freedoms. At other points the album plays with working class imagery and different bodies of water. Blixt has basically admitted in interviews that she’s more interested in melodies and harmonies than she is in lyrical content, though I’d say there’s just enough interesting imagery to keep her lyrical content tantalizing, if not necessarily edifying.

This album might be the definition of a good album to put on while chatting with friends on a quiet weekday night, or one to play while reading, or whatever. The duo’s sense of tone is intuitive and very pretty, and at times the songwriting almost matches the moodiness of the production. I’m not sure if I love Bobby and Blumm, but I would totally tune in every week to see if they and Everybody finally got together.