Disc Two
1. She Belongs To Me
2. Maggie’s Farm
3. It Takes A Lot To Laugh, It Takes A Train To Cry
4. Tombstone Blues
5. Just Like Tom Thumb’s Blues
6. Desolation Row
7. Highway 61 Revisited
8. Leopard-Skin Pill-Box Hat
9. Stuck Inside Of Mobile With The Memphis Blues Again
10. Visions Of Johanna
11. Ballad Of A Thin Man
12. Like A Rolling Stone 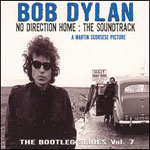 The Bootleg Series Vol. 7: No Direction Home - The Soundtrack

Bob Dylan’s legend hardly needed to be solidified when the first Bootleg Series discs were released back in 1991. Even at that point, in the middle of a creative rut beginning with a handful of joyless born-again Christian records in the late '70s and early '80s and ending with a pair of passable covers collections a couple years later, his ubiquitous influence over popular music and culture still seemed very much assured. Nonetheless, he was beginning to seem more and more like a relic, a figure so intertwined with the counter-culture romance of the 60’s that, in the hedonism of the 1980s, he found himself with less and less to say.

Fortunately, the fourteen years since have been especially kind to Mr. Zimmerman. After a brush with death in the mid-'90s, he went on to make Time Out of Mind and Love and Theft, two unbelievably strong collections of new (and decidedly secular) songs, continue his so-called Never Ending Tour to much acclaim, and release The Chronicles, the long-awaited and highly bizarre first volume of his memoirs.

And of course, the glorious Bootleg Series has continued. The three previous volumes have covered either full concerts (the incendiary 1966 performance at the Royal Albert Hall and a Halloween 1964 gig at Philharmonic Hall for Volumes 4 and 6, respectively) or compilations of bootlegs from a particular tour (as in the 1976 Rolling Thunder Revue covered in Volume 5). No Direction Home, doubling as a soundtrack to Martin Scorcese’s upcoming documentary, breaks from this trend, offering a smattering of live rarities alongside a heap of alternate takes from his golden era in the early to mid '60s. It runs chronologically, beginning in his formative years as a teenage coffee house folkie in the Twin Cities to his plugged-in apotheosis with Highway 61 Revisited and Blonde on Blonde.

Disc 1 focuses entirely on his pre-electric material, right up to the surrealist masterpieces that made up the second, acoustic side of Bringing it All Back Home. It begins with “When I Got Troubles,” a brief, grainy 1959 demo notable only for being the first known recording of a Dylan original, and for the hushed, almost boyish tone in which he sings it. Even as a teenaged upstart, Dylan was a master interpreter, as evidenced by his impassioned send-ups of traditional standards “Sally Gal,” “Man of Constant Sorrow,” (yes, the same one they did in O Brother Where Art Thou) and “Dink’s Song,” as well as a heart-rending take on Woody Guthrie’s classic “This Land is Your Land.” The real gems come later, though, with early versions of “A Hard Rain’s A-Gonna Fall,” “Don’t Think Twice, It’s Alright” and the lamentably relevant “Masters of War” that rival the classics found on The Freewheelin’ Bob Dylan. An alternate take of “Mr. Tambourine Man” with wobbly background vocals feels a bit superfluous as does “Song for Woody,” which has been widely available on his eponymous debut for more than four decades, but the way the disc coheres to demonstrate Dylan’s rapid and startling growth from a naïve kid with a few Guthrie records to full-on poet laureate make it well worth its 72 minutes.

Disc 2 finds Dylan expanding his reach musically and lyrically in the mid '60s, and infuriating the folk establishment on both sides of the Atlantic in the process. After a low-key start with a drum-less take of “She Belongs to Me,” it takes off with the infamous electrified performance of “Maggie’s Farm” at the Newport Folk Festival in 1965, a scorching rendition which, as legend has it, found folksinger Pete Seeger wielding an axe backstage, trying to cut the power supply to Dylan’s amps. Elsewhere, “It Takes a Lot to Laugh, it Takes a Train to Cry” is found as a “Tombstone Blues”-like stomper in an earlier incarnation, and “Tombstone Blues” itself is found in a briefer, alternate version featuring scorching guitar work from Mike Bloomfield. The versions of “Stuck Inside of Mobile With the Memphis Blues Again” and “Highway 61 Revisited” don’t differ enough from their studio versions to warrant inclusion (especially the latter, which is essentially the same exact arrangement only without that siren/whistle thing, and is thus laughably inferior), but the smoky, atmospheric take of “Desolation Row” with electric guitar, and a startling up-tempo “Visions of Johanna” complete with a rapid-fire bassline more than make up for those shortcomings, as does an intense and somewhat hilarious live performance of “Ballad of a Thin Man” with The Band. It closes with the life-affirming Royal Albert Hall performance of “Like a Rolling Stone,” again with The Band, another previously-released cut, but one that’s so powerful and ultimately so relevant to the narrative arc of the compilation that its inclusion is only sensible.

I’m sure the well of worthwhile Dylan bootlegs will dry up eventually, probably long before they actually stop releasing these compilations, but No Direction Home stands easily alongside all of the previous entries, even if it isn’t as revelatory as one might have hoped. The project, along with Dylan’s creative resurgence and continued canonization, have elevated him to something beyond a legend, an American who will one day (if he hasn’t already) be recognized as an auteur on par with Dickens, Welles, Hemmingway, or whoever, something that perhaps didn’t seem so assured back in 1991. But forget the hyperbole – Bob Dylan isn’t just another dead white guy yet, and this music, more than four decades removed, still remains as visceral and subversive as ever.