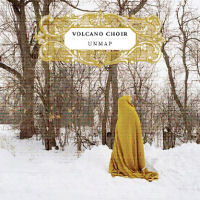 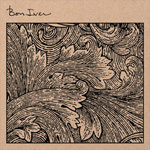 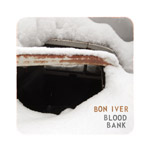 Like any pensive indie folk troubador (dude) worth his weight in patchy pube-beard, Justin Vernon is trying on a few different outfits for this, his follow-up EP to the, by all means, successful For Emma, Forever Ago (2007). Essentially, Blood Bank is one pretty song—the titular, opening track settling somewhere close to what Damien Jurado’s doing these days—and two similarly pretty experiments in stretching Bon Iver’s sound. The black sheep is “Beach Baby,” but only because it could fit so warmly between, say, “Skinny Love” and “The Wolves,” dainty, patient, and punctuated by a slide guitar that signals the song’s climax. “Baby” isn’t, frankly, anything new, so it seems a step to the side in an otherwise brisk and unadorned preview for the ensuing sophomore record that will undoubtedly be bigger, way more ambitious, than whatever we’ve come to expect from Vernon and his band.

Not that the guy will ever abandon that chicken soup for the soul creaminess that’s carried in his falsetto alone; too many lonely and sensitive coteries expect comfort, or at least sympathy, from Vernon’s explicitly off, but wonderfully rich, harmonies. So “Blood Bank” works that angle well, shameless as it goes on about meeting at the metaphorical blood bank (“See lookit there, that’s yours / Stacked on top with your brothers / See how they resemble one another’s / Even in their plastic little covers.”) but never forceful, instead just open, wide open, and totally at peace with itself. “Bank” in that way reminds of Dave Bazan’s best, most chocolate guitar tones and mopey aspirations, how the romanticism of it all is as sincere as it is a bit cliché.

Of course this is relative, all this expansive jargon about Vernon’s lofty goals, but what counts is that he’s moving forward and it seems to be working. If these increments in a new direction only amount to a shift in the focus of the percussion and some unflagging Auto-tune, then thank God it’s not obnoxious. “Woods” gets close, and it surely is all Auto-tune, so singularly that it could use a spanking, but Vernon makes the gimmick act like a logical conclusion to where his voice can, and maybe should, go. “Babys” steers indulgently close to nicking Steve Reich’s jugular, but then it too finds its way to a painless and delicate nadir, like it got worked up for nothing and then fell asleep. Which, I don’t think, is any sort of comment by Vernon on his growing popularity and the potential anticipation surrounding a song where Bon Iver uses only Auto-tune; I think the EP’s mostly just about the seasons and their archetypal emotional corollaries and then how fleeting that can be. But what’s so ultimately stirring about the EP is that all it does is point, in nice, sweeping motions we can easily follow, to something grander sure to come.