1. Troublesome Houses
2. Teach Me To Bear You
3. With Cornstalks Or Among Them
4. The Sounds Are Always Begging
5. Go Folks, Go
6. That’s What Our Love Is
7. Merciless And Great
8. Where Wind Blows
9. Someone Coming Through
10. Kids 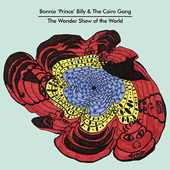 The Wonder Show of the World

If you’ve seen Jackass 3-D then you can probably surmise why this sentence rests where it does—as well as having seen a thirty-foot turd, in slo-mo, launched like a rubber, shell-shedding doomsday device, jiggle dangerously close to your grill. You may never get to see that again. More likely are your chances of witnessing Will Oldham impersonate a gorilla handler while Bam Margera’s dad, literally, shits himself. Even less surprising is that Will Oldham can play a pretty mean gorilla handler; the acting chops and forehead have broadened to convincing degrees.

Because if 2010 demonstrated anything in the asymptotic career arc of Will Oldham, it’s that his masterful prolificacy has now graduated into full-on ubiquity. And The Wonder Show of the World, his eleventh release in half as many years, is everything for which we hope in a new Bonnie “Prince” Billy release: creeping yet expansive alt-folk; an ever-strengthening voice; erotic imagery (“The smell of your box on my mustache”) paired with thoughts on family, never uncomfortably; a stark, doodled cover; a doting collaboration. Unsurprisingly, Wonder Show appeared without fanfare on the heels of late-2009’s Funtown Comedown, a contemporary, live take on early Oldham and Palace cuts, released under the banner of “Bonny Billy and the Picket Line,” which was released on the heels of 2009’s Beware, that on the heels of Is It The Sea?, a live album recorded with Harem Scarem and Alex Neilson during Billy’s tour supporting The Letting Go (2006), which came out (the live album, not the studio full-length) shortly after Lie Down in the Light (2008) and Wilding In The West (2007), the latter another live album. I think. There was a song with Hot Chip in there somewhere.

It’s almost as if Oldham himself doesn’t expect anyone to keep up. Which is dependably, refreshingly pleasant: The Wonder Show of the World is fame in all lower-case, ego quietly confident. Did I mention how pleasant it is? With the Cairo Gang—otherwise known as guitarist Emmett Kelly, a dependable Oldham collaborator, filling the same shoes Matt Sweeney memorably scuffed up with the fantastic Superwolf (2005)—Oldham’s given a vast ‘scape of acoustic foliage and click-clacking knick-knacks over which to stress-test his consistently fortifying voice.

Did I mention how consistent he is? With each new piece of music he touches his technical prowess gains in assured increments, his voice now commanding and, though still creased and swarthy, surprisingly aromatic, his lyrics more comfortable than ever. Kelly’s guitars, sometimes carnal and crunched (“With Cornstalks Or Among Them”) and sometimes puffy, lilting (“The Sounds Are Always Begging”) kneel reverently before Billy’s voice, while, at times, vice-versa’d, Oldham tip-toes around Kelly’s impressive breadth of and control over genre. Flashes of Spanish picking, unencumbered by the choral, echoed haunt of Billy and countless others, forms the essential backbone for “Someone Coming Through”; alternately, Oldham’s prescient presence pushes Kelly’s similarly styled guitar to something lusty and lidded for “Kids,” the album’s hushed but ravishing closer. Grunge, folk, country, post-punk, smooth jazz ballads: these are just words tiered under a dynamic too natural, a sentiment too organic, to overtake the album’s ultimate and intimate spirit.

Which, essentially, is a spirit of sharing, writ in small rooms and improvised friendships. The Wonder Show of the World—while not as aching as Beware, as joyous as Lie Down In The Light, as ravenous as The Letting Go, as catchy as Master And Everyone (2003), as portentous and Harmony Korrine’d as Ease Down the Road (2001), as frightening and eviscerating as I See A Darkness (1999), as beholden to whatever albums or EPs or partnerships or guest spots I’ve forgotten to mention as the whole of his career has been in retrospect—is a predictably good and solid album, as good a place as any to start for the uninitiated, and as good a consolidation of his strengths as any for those more than familiar. A nice cap to a decade of thickening ubiquity, Wonder Show sounds preternaturally untroubled, accepting of the artist’s past as he looks forward to further spans of influence, to an audience composed equally of long-time fans and guys who sing shitty songs with Weezer and staple their dicks to their thighs. Ease down the road, indeed.