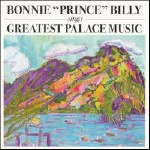 Tweet
How's this for a "greatest hits" concept: gather fan favorites from a comprehensive back catalogue by letting them vote and then, as an extra surprise, transform the uniformly dark, introverted songs into fully arranged country versions with help from a whole host of Nashville studio musicians--now including saxophone, fiddle, mandolin, pedal steel, & accordion, amongst a plethora of other instruments. All of this music was written and recorded before Will Oldham (aka Bonnie "Prince" Billy) moved on to his more well-known moniker (cemented by his seminal I See A Darkness and two excellent follow-ups) but seeing as how his fanbase has been parasitically growing over the past five years, a collection makes complete sense. The approach, on the other hand...well, it makes a little less sense on paper.

But any doubts about how the two sides coalesce (yes, he'd leaned toward country before but never to this kind of extreme) are quickly dismissed with "New Partner," which bravely announces the new, full-band aesthetic undertaken here. Pedal steel, fiddle and electric guitar wrap around Oldham's unmistakable vocal timbre, wavering in and out of tune against far less desolate production. "Ohio River Boat Song" turns the country-fication up to ten and he plays along, even affecting his voice with an ever-so-slight country twang. Though the lyrics are typically bittersweet, you can, like on the almost comical "I Am A Cinematographer" and "I Send My Love To You" (there's just something about some kids quacking followed by the words "fuck the land and two if by me" that works for me), almost hear the smile on this face. It might be easy to misread this as a prank Oldham is playing upon his dedicated fans, but the results we hear on the majority of the record are far too sincere and to be merely tossed off as an elaborate joke.

Like most albums, Greatest Palace Music has its definite high and low points. "Gulf Shores," "Viva Ultra," "More Brother Rides," "Riding," "You Will Miss Me When I Burn," "West Palm Beach" and "No More Workhorse Blues" all sound great in their new arrangements; in a few cases, the fuller instrumentation opens the song up and lets it work in drastically different ways ("Viva Ultra" and "Workhorse" being the best examples), while others effortlessly adopt what made the originals so good without forcing any fundamental change (outside of the instrumentation, of course) upon them. Similarly, "The Brute Choir," "Horses" and "Agnes, Queen of Sorrow" (the last of which is one of my favorite Palace-era songs) survive the trip without any detrimental shift (the female vocals on "Agnes" being one of the few exceptions), though I wouldn't say any of them is significantly improved the second time around.

And, of course, some of these tracks just don't fare quite as well. The aforementioned trio of ridiculousness -- "Cinematographer," "I Send My Love To You" and "Ohio River" -- are saved from being complete filler by remaining so infectiously lighthearted, but neither retain what made them such easy choices for this collection in the first place. "Pushkin," on the other hand, goes overboard with its chorus backing vocal; just because you're singing "God is the answer" doesn't mean you need a faux-choir singing along, Will.

As I said, Palace Music certainly has a tongue placed lightly in its cheek, but never reeks of being orchestrated by a person with a smirk on his face; rather, it truly sounds like someone having a great time revisiting old songs from an era that he has slowly grown past. I'm sure some will look at the fact that he chose to do something so strange with songs that his fans chose for the collection as oddly contemptuous, but to think that they won't follow him on this is disappointing; it may be campy at times, sure (seriously, try to wipe the smile off your face the first time you hear the new "I Am A Cinematographer"), and I'm not certain this is a style I'd want him to keep, but frankly, it says a lot about an artist willing to take a chance to give his fans another side of these songs when all he really had to do was collect them and toss them out with some new packaging. If the country inflection just isn't your thing, you can always just make your own collection of the originals, but for the rest of us we're given a release that makes something exciting out of a pretty unbeatable back catalogue.