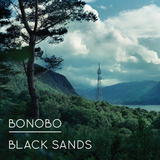 Bonobo is gradually becoming a kind of electronic Steely Dan, building up their chops and honing their influences to see just how far they can push that yacht-rocking breaking point of awesomeness. Think of Simon Green as the anti-Flying-Lotus, allowing live jazz and hip-hop grooves to spin out instead of splinter and warp as they pass into another dimension. While this approach might not have the sort of futuristic cachet that such music often seems to require in order to find a wider audience, the consistent warmth and engagement of Black Sands is a stunning reminder that unconcerned, masterful subtlety, that defiantly uncool sax solos, carefully orchestrated instrumentation, and patient, indelible, undramatic slow burns can be as stunning as genre-bending ambition.

Bonobo is able to create ambient music—at least in keeping with Brian Eno’s maxim of “as ignorable as it is interesting”—without the genre’s usual minimalism, instead taking the basic building blocks of pop music—string and horn sections, for example, with most instruments taking lead turns (clarinet, trumpet, flute, and so forth)—and keeping the affair devoid of orchestral swells or Reichian patterns. When not playing the lead role, these pieces hover in the wings, both motif and atmosphere. And unlike, say, within a Tortoise album, such reluctance to come to the forefront of the mix heightens the mystery of the slow-but-solid breakbeats and synth melodies, as opposed to encouraging it all to congeal into a drowsy mess. Nothing is chopped up without good reason, and as the album wears on, one almost forgets that it has anything to do with computers; a seamless Frankenstein arises, the music of Entroducing (1996) gene-spliced into a living, breathing beast.

That said, Bonobo’s electronic/DJ background probably still makes their quiet appropriation of post-rock tropes so unassuming, paradoxically lending the project such a unique and inviting tone. “Prelude” begins with a staunch, quick melodic theme, this quickly deconstructed in “Kiara” via bubbling synth and big beats. But the original theme returns, paraphrased by violin, assimilating the two songs memorably—without making a big deal out of it. “Kong” and “Eyesdown” lay the beats down more heavily; they’re comfortably mechanical but with computer magic obscuring how truly flexible the beats are. And full orchestration never really dissipates: horns pop up, reverb-spotted, in the background like Talk Talk notation. And then the heavy synth figure at the end of “Eyesdown” acts like it’s putting This Is Happening (2010) to shame in a hurry; a strong new flavor is added and the song doesn’t sound stupidly proud of itself.

Soon after, wide, jazzy melodic structures take hold with a vengeance: “El Toro” basically performs a live hybridization surgery of Soulquarians and the aforementioned Tortoise, the song a far better result than either of those groups could ever manage on their own, with softly diced live drums supporting a thin platform of tension on top of which boppy, muted horns and a roiling bass line scuffle. “We Could Live Forever” builds around a core of funky guitar, hi-hat spinning off the center mingling with percussive nothings and bird-tweets, all before a sincere and sincerely fantastic flute breakdown. “1009” starts out as some firmly thumping dubstep, but again, the strings emerge to simultaneously smooth out the song’s aggression and mount tension; There Is Love In You (2010) weeps.

For some tracks Andreya Triana covers vocals—sounding, at times, like a flattened Beth Gibbons—but even her lyric-heavy parts refuse to lock the album into something repetitive; the vibraphone motif of “The Keeper” returns and weaves in and out of the thick bass and growing atmosphere. (“We can’t go on,” she winds up repeating as the song spills into noise.) “Stay The Same” starts with acoustic guitar reminiscent of Pause (2001)-era Four Tet, just as many other Black Sands cuts do, but the relentlessly blended production and constant, consistent invention on display (background chorus! smooth-jazz sax! harp! shaker!) rates it the work of a musician with an eye not just on head-bopping beats but shit like codas, shit like harmony, like emotional arcs.

And just like with the Dan, every song is a miracle of highly processed, multi-layered show-off-ery, somehow remaining both spacious and warm. But coming from the perspective of a DJ, Bonobo smashes and grabs an incredible amount of the cream of modern music—all those instruments mentioned above—and brings it to butter without breaking a sweat. There’s a feeling of total freedom thoughout Black Sands, of effortless tetherlessness. While we’ll always need the obvious frontier-runners like FlyLo pushing the envelope in what will next envelop the audience, somehow Simon Green’s holding back of the cards seems even more impressive. Black Sands is an album so fully realized that comprehending the places he still so obviously has yet to reach is staggering.