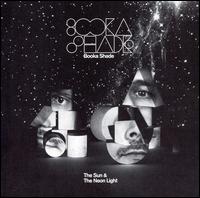 Booka Shade: The Sun and The Neon Light 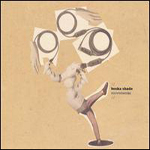 When I said I was doing three electronica albums this week, Chet joked that I was “a machine… with a heart.” I noted that my cache of electronic music metaphors (shouldn’t there be a wiki for that?) would be strained; Conrad noted, “may I suggest, ‘a machine…with a heart.’” Hee!

Booka Shade’s brand of techno is far more straightforward than the Allien/Apparat collab, and far more accessible than Hebert’s deconstructed house. I’m not really sure Movements is a machine, but I’ll comment on its heart, since the anecdote highlights what we expect from good electronica: warmth, but warmth that sounds human. Isn’t that weird? Data, Cylons, and Small Wonder aside, I don’t think our culture really cares if robots have feelings; the question, then, is whether or not it matters if electronic music does.

My roommate is dancing in the doorway as I write this; she loves “Mandarine Girl,” which has been out for a while, and her thoughts on the album are as follows: “it’s like the fifth track of an Orbital album. Y’know—the good one. Except every track here is the fifth track of an Orbital album.” It’s a fine enough comparison, and in the sense that Booka Shade isn’t exactly working from the broadest palette—ringing, round synths, square bass lines, nunchuk-fast drum programming—the overarching similarity the comment hints at rings true. Which might sound like a criticism, but this stuff sort of works like early Tortoise: the point isn’t necessarily how limited the palette is, but how much they can do with a limited palette. So when they take these parts and transform them into waterfalls, car pile-ups, the condensed history of the rain forest, Spirograph drawings, and, yes, a factory of machines, Booka Shade mainlines joy directly to their audience’s body, teaching them the “Birds and the Beats,” reframing the relationship between machinery and nature as a series of emotional states.

And it’s not like if you pay closer attention you’ll find nothing more about these tracks to unravel besides their big melodies and thick drums. “Paper Moon” has all sorts of subtle vocal samples that punctuate the riffs; its melody is constantly altered in slight ways by additional harmonies. “Take a Ride” throws creeping percussive snags in front of a bass line that slowly tries to assert itself. “Night Falls,” crossing its wriggling fingers, supports each lead with a bevy of counter-melodies, reversed accent riffs, and delayed harmonies. “Body Language” is like a techno “Discipline,” Fripp-ing riffs against themselves, inverting, reversing, and turning their scales inside out. There is complex stuff here; it just needn’t get in the way of your desire to dance to it.

I say this to Meghan, noting how much detail they throw into the tracks—quick breaks, instruments playing quick riffs in spaces, counterintuitive drums routs—and she rolls her eyes: “who cares? This shit is fantastic. Give it an 80!”

“Fine,” I say, because how are you going to argue with somebody who is getting down at 7PM on a Wednesday, while still sort of watching Law and Order reruns in the other room? It’s a testament to the sheer ebullience of this work at how quickly you’ll find yourself grooving along. The broader trend in techno and trance may be forging inwards, to darker places, but Booka Shade keep things entirely in the present; they make songs that act in the same way people react to songs on the dance floor. It may not be a machine…with a heart. It’s a series of machines manipulated by people who understand the rest of our hearts, and isn’t that exactly want we want?