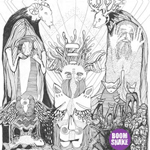 I know what you’re expecting. CMG is reviewing a band calling itself Boomsnake, so this must be one of those things where we talk about something crass and pop-cultural and mass marketed and we a) get heavy with the irony, b) cathartically empty our collective bowels all over it, or c) praise it just to fuck with you / the authority of other sites / our fathers / Metacritic’s cumulative ratings. Except there’s another option, a rare and deceiving and paradoxical one: Boomsnake are actually a good band wearing their terrible decision out in public. There’s almost nothing not to like about them—except that they’re called Boomsnake. That’s Confederate flag levels of poor aesthetic choice. It’s not like I can play this for friends—“Hey, who is this great music by?” “Oh, this? Um…they’re called Boomsnake.” Instant social exile.

The name is so fucking bad that it’s simultaneously miraculous the band’s EP made it through my inbox and also a foregone conclusion—how could I not download something calling itself a Boomsnake? Can cruel promotional technique really be the crux? Lindsay rightly pointed out that the name evoked “a Kid Rock cover band that occasionally steps out of its format to encore with this song.” I would have also accepted “a band whose bass player used to be in porno,” or “former Marines who wrote this EP during their fifth tour of Baghdad.” Turns out that it’s an atmospheric folk-rock EP (seriously) with the wherewithal and soundness-of-mind and patience to re-record alternate versions of previously released songs. Turns out the rhythm section is pretty spectacular, the vocals sonorous and lasting, the lyrics tasteful (if at times hokey), and the arrangements deliciously minimal. Even the album cover is pretty good. What the fuck is going on?

Listen to those vocals on “Sticks Stones & Animal Bones,” complexly weaved, spritely and alive over complicating drums. Or how “Excuses” turns from a playful little guitar strum into the choral reverb of full band accompaniment (though then, confusingly, to a regrettable little rock-out bridge). To the rhythmic pacing and slippery undercurrent in “Totem Tale Blues” or the clackety jam of “Sampled Demolition.” To “Busy”‘s aesthetic shift with its ambient overlay and understated beauty, before a count-in to toms announces some early-U2 bombast and finally the kind of gentle tinkling U2 never quite went for. It never quite reaches the embarrassing gush-out of an Anathallo, but Boomsnake (I can’t even type it without shaking my head) are still unapologetic about their sentimentality—“I see better when I dream,” the singer of Boomsnake (snicker) says without hyperbole. This is some impressive singer-songwriter fundamentals tastefully and meticulously expanded and arranged into something I’m going to come right out there and say should be declarative of the band’s arrival. Of the arrival of Boomsnake. Ugh.

So, guys, here it is: you have to change your name. You’re too good not to. It’s probably personally relevant in some way, or has been the band name since high school, but shed that skin. You’ve got a pretty great EP here, something to be really proud of, something that will make people remember you and check out your full length when it’s ready, and it sounds like the lineup is set, and I can see you’re touring right now, so everything seems to be going great. But that name is like a big, meaty bouncer standing outside a cute little coffee house. You don’t want the kind of listeners who think Boomsnake is a good name. What work needs to be done re-establishing your brand recognition and re-printing your promo materials and album covers and t-shirts will be mitigated by the fact that your new fans, the ones that will really appreciate this and spread the word-of-mouth, will be able to utter your name without having to explain themselves.