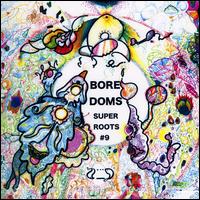 I love it when vocals sound like quantum physics, when you can hear crystal stalagmites and stalactites growing on chimey waves of pitched noise. And on this recording of a New Year’s concert in 2004 the Boredoms make the best of the live choir that essentially replaces Eye’s midi trigger fingers; we get adapted and beautiful harmonies that sound like they were recorded in the magical cave where Gimli and Legolas finally got married. Super Roots 9 is beautiful, is what I’m saying, even if the one track one trick sum of it can feel like a Boredoms happy anvil nailing you in the head. Like, you were expecting drums, right?

Then again, what hand-holds there are to grasp this music—for example, the teasing way the band slowly brings the drums in—give pretty big handfuls, and while fans of minimal or ambient work will find the most to enjoy, I think fans of the Boredoms in general will find this an interesting release. Because let’s face it: part of the appeal of the Boredoms, wherever you attack them from, is the simple fact that for no apparent reason most people seem to like them. Like few other bands—say, Can—they somehow manage to remain seriously uncompromising and wholly accessible within the indie community. It’s a feat that I think could be explained several ways—the Boredom’s outness gets overemphasized at times, perhaps, as a way to ignore the more hippie leanings of the group—but ultimately the Boredoms get their audience, and get the kinds of work that turns on people who normally wouldn’t touch out music with a ten foot pole. And even if this thing drags, the idea of Super Roots 9 is pretty enough to make its existence comforting, and that’s kind of how the Boredoms are. If they disappeared, we’d all be a little sadder.

“LIVWE!!” sees Eye and his band mates, the Yoshimi/ATR/Yojiro drum trio, sailing headlong into 40 minutes of unadulterated bliss, separated from the studio trickery that allowed the equally happy Vision Creation Newsun (2000) to compartmentalize bliss into other-emotive pieces. The studio genius of that album was critical; it mediated the sheer joy the band was going for in ways that gave it narrative structure. “LIVWE!!” plays out like an extended remix of a short moment of zeuhl catharsis. The problem here is that there is nothing it is providing catharsis for, other than the silence or the T.I. that was presumably playing before you switched to this track.

So this pretty, rollicking beast is somewhat ineffective. And as the recent Vice reissues of the previous Super Roots installments show, the Boredoms have been very capable of using this series to expand their sound while saying something well. Here they’re saying something, but it’s like a battering ram filled with Pop Rocks. And that’s the great Boredoms/V8redoms tragedy: as they continue to move more and more into this world of sound and out of a world of structure (however chaotic the concept of structure has been for them) we lose the narrative moments that made Super Æ (1998) and Vision Creation Newsum fly. “LIVWE!!” just sort of hovers prettily above the ground, smiling at you and warmly inviting you to overdose on the sugar it so willfully refines.