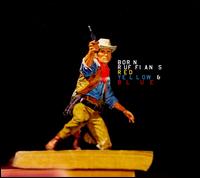 “And we all nodded at him: the man of finance, the man of accounts, the man of law, we all nodded at him over the polished table that like a still sheet of brown water reflected our faces, lined, wrinkled; our faces marked by toil, by deceptions, by success, by love; our weary eyes looking still, looking always, looking anxiously for something out of life, that while it is expected is already gone—has passed unseen, in a sigh, in a flash—together with the youth, with the strength, with the romance of illusions.”

Contrast this scene, from Joseph Conrad’s Youth, with the spazz funk of the overcrowded Toronto scene’s group du jour Born Ruffians, whose Red, Yellow & Blue is so stylistically a contemporary type of record that it could only have come out in 2008 and will sound as anachronistic a few years from now as Clap Your Hands, Say Yeah! sound now. These three teenagers have been prematurely tapped as simultaneous indicators of both something big to come and a distillation of the best the genre has to offer. But it’s hard not to hold the prevailing thought that informs “I Need a Life,” which says “Come help me out / been stumbling ‘round trying to fill my cup / It’s half empty / been that way all my life” and its refrain “Oh, but we go out at night!” as evidence of small-mindedness and a priori experience’s self-centeredness. Irreverence is passed in place of perspective and timelessness passed in a rush to put out a fun, if completely disposable, record.

Songs like “Barnacle Goose,” “Hummingbird,” and “Kurt Vonnegut” distill the Ruffians’ primary formula: highly syncopated rhythms and undistorted guitars under tremolo hoots and lyrics about adolescence from adolescence’s perspective (read: soon embarrassing). It’s a familiar thing that we’ve no lack of these days (most of this review can probably be cut and paste when we receive promos of Tokyo Police Club’s forthcoming album). But when you consider the alternatives—the too-soon assumption of political awareness or pedantic lecturing that comes from other youngins like Bloc Party—Born Ruffians have provided about all you can expect from an unambitious debut; Red, Yellow & Blue‘s fast-fading excitement is sure to initially please. It’s the kind of music for short time spans and small spaces, like the five minutes before a bus arrives or while cooking, hardly lending itself to partnership.

Arrangements are non-typical and inventive, especially on the confident “In a Mirror” and “Foxes Mate for Life,” which are Red, Yellow & Blue at its most appealing and melodically accessible. “Hedonistic Me” isn’t the strongest of choices for an EP holdover (I would have gone with the infectious “Piecing it Together”), but the song’s swinging gait thankfully breaks up what quickly becomes the listener’s wafer-think tolerance of the treble-heavy production treatment of rolling toms, sharp guitars, and vocalist Luke LaLonde’s wailing.

Born Ruffians are as eloquent in their summation of today’s indie rock style as any other likeminded band; in that sense Red, Yellow & Blue is as literate and aware as its title’s reference to primary colors implies. But knowingly limiting one’s scope to temporary fun predictably keeps the band from turning out something with lasting power (and is another curious instance of Warp, a progressive and knowing label, coming too late to indie’s party [the other being the strangely inconsistent and derivative Maximo Park]). The music to be found herein is ultimately as impermanent as the youth from which it came. Joseph Conrad knows what’s up.