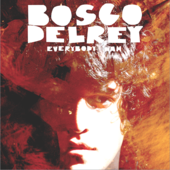 I was first introduced to Bosco Delrey by a Last.fm shout that described his debut album Everybody Wah as sounding “like Lou Reed jamming campfire gospel rockabilly,” whatever the hell that means. Los Angeles’ KCRW, on the other hand, pegs Delrey’s music as “perfectly surreal pop beat troubadourism for modern America.” And Diplo, curator of Bosco’s label, Mad Decent, views him as a “garbage can Elvis from New Jersey,” composed of “a teaspoon craziness, a pinch of rockabilly, and full cup of soul dressed in a leather jacket.” Even setting aside all of this press release confetti, there is an undeniable sense of everything going on at once and at liberty on this album, and Bosco Delrey, in assimilating such a vast field of influence, does that which comes most naturally to him: he pulls back the cinema curtains, and does it all that bit wider.

On “Archebold Ivy,” a sort of Elvis-Kinks hybrid, a harpsichord rumbles on over chugging bass/drum rhythms, bleary synths, and all sort of pieces of electronic shrapnel, yet remains thoroughly endearing and somehow catchy. Despite all it contains, “Ivy” is only narrowly (by two seconds) beaten out as the shortest track on the album by the similarly propulsive “Lovely Sleepy Dead,” another example of Delrey’s rockabilly boogie-down tendencies overriding any impulse of restraint. Believe me, Everybody Wah is the kind of album so overflowing with aspects requiring comment that the music becomes difficult to summarize within reasonable sentence structure; suddenly, descriptions with four or five adjectives don’t seem so ridiculous.

“Get Outta Dodge” and “Afterlife” are probably as close as the record comes to recognizable, their foundation steadily strummed guitar and its strummer’s penchant for a memorable hook. His lyrics aren’t particularly worth paying attention to—“Afterlife” in particular is about a “ghost train” heading for “life after life after life after life”—but Delrey’s voice makes up for how flighty and nonsensical things can get. “Explelled Spelled Expelled,” a ballad of cathartic relationship self-help, especially benefits from his delivery, as much of the leaking hurt is locked into the afflicted vocal drawl.

While his ability to bend genre and style into objects ancillary to Everybody Wah‘s essence is certainly impressive, what’s more important is that Bosco Delrey has made a seriously solid and enjoyable album. People can call this “rockabilly Lou Reed leather jacket-soul gospel troubadourism” until mouths begin to dry up, and in some ways they’d be right, but what is equally important is the finished product of all these arresting influences. Put simply: this is a thirteen track album which is listenable front-to-back; some songs catchy, some occasionally sparse, some deceptively durable. It may lack the curatorial cohesion of a classic album, but Everybody Wah never seeks to reach that far, instead content to revel in as many synonyms for awesome as it can lay hands on.