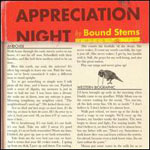 Frantic and all over you from the moment the first song kicks in, Appreciation Night is a schizophrenic journey into the already diametric minds of the Bound Stems. The album slips back and forth between a variety of styles, tempos, peaks, and valleys as if the Stems stuck their hands, blindly, into a cocktail of meds and designed a record based on the emotional ups and downs they experienced. It’s a rollercoaster, not only from one song to the next, but also from one movement to another, trapped within the confines of the same song.

Drummer and co-producer Evan Sult has said that he walked around Chicago during the making of Appreciation Night, recording the sounds of the city’s inhabitants. Like the band’s hometown, these songs are laced with labyrinths of conflicting characters and sounds. Guitarist/vocalist Bobby Gallivan’s lyrics often extend beyond the first person, shifting into numerous narratives and expositions, representing an extended family, a community, or even a region. We move through neighborhood avenues, the interiors and exteriors of homes and relationships; the presence of other speakers and singers in the mix diffuses Gallivan’s singular “voice,” which is sometimes a shared lead with multi-instrumentalist, Janie Porche, and at other times is the whole band chanting its way to a song’s climax. Field recordings, too, pop up in the nooks of the album, during songs and in between them, thickening the impression of place and presenting the notion that this album -- its songs and characters -- exists in a tangible world with tangible human noise and not just inside the studio thrashes of guitars and drums. This place is familiar, or at least that’s the intent.

Introductory track“Appreciation Night” is a collage. In less than thirty seconds we hear an old-timey honky-tonk piano and horns, an airport (or train? or bus station?) terminal voice welcoming us to Chicago, an airplane landing (or taking off?), another voice welcoming us to a show, an audience in a bar (or a school house? or a town hall?) counting down: one-two-three-four, the band, all the while, in the background, warming up their instruments before descending into the opening licks of “Andover.” “School kids with their families and, like hell, their mothers try to be on time / Bless this earth, my soul the universe, it’s often big enough to leave me out, ” Gallivan sings, guiding us into the fray of neighborhood imagery with Porche’s voice echoing him in the background. The opening lines establish Gallivan’s tendency to reveal both a personal narrative and grand snap shots of the city streets, his lyrics working as short story, memoir, and document. He continues, “I was born into a dream, she woke me up at dawn, now my suitcase is gone / Morning symphony, my neighbor cried, the neighborhood is used up / We kicked them out.”

Several songs on Appreciation Night work like “Andover,” that is, a series of geographical images and personal reflections (often relationship-driven) are conjured up by the words, and then, following some interesting musical transitions, a repeated phrase, lyrically or musically, emerges in tandem with the theme to help ground us when we come back to a song and unfold its meaning inside repeated listens. On “Andover,” the band peaks with Gallivan’s insistent, chanted lyric: "We’re headstrong, we’re headstrong, we’re headstrong, it’s our fault, it’s our fault, it’s our fault." This is a slogan that foreshadows the album’s scope, somewhere between forced dichotomy and natural diversity.

Elements of Modest Mouse and Wolf Parade surface in the Bound Stems, in Gallivan’s jerky vocal delivery, the pairing of shouting with sung vocals, and the band’s love for anthemic musical passages. With endless levels of layers in each track, the Bound Stems are more claustrophobic than their influences, even more so than the layered trip that is The Moon and Antarctica (2000), and their songs are deceptively “prog,” often defying verse-chorus traditions and simple time signatures. In fact, the stop-start versatility of the rhythm section is on-point. Sult and bassist, Dan Radzicki, are able to turn angular stomps into post-rock grooves (or vice-versa) at the drop of a hat. They rarely stay in one place for long and their slippery nature is crucial in shaping the face of the record. Gallivan and guitarist, Dan Fleury, are keen on playing catchy single note lines as songs build and kicking in with full-on chords for their most passionate sections. They milk that climax.

“Excellent News Colonel,” the most intriguing song on the album, begins with the sounds of Porche talking to the engineer in the studio. As Gallivan and Fleury interlock a pair of dreamy guitar lines, the drums roll in and Porche sings, “I’ve fallen for someone in New York / It’s something that I hadn’t expected / But I think that it’s so much better for us both… / I still hope you find the time to write.” The music slides into a different place, becoming darker for Gallivan’s vocals, “I’d like to talk and convince you to come to Chicago because you’re welcome here love… / We’ve seen the rise and fall of a family, in just two blocks it’s been too much talking.” The music changes again, moving into an uplifting romp. With a bouncy drum track and hand claps behind them, Gallivan and Porche share the lead, uniting until the song’s close.

The mini-song soundscapes, stitched in between the more traditional songs and filled with various voices, help build the communal atmosphere of the record. “Pulling On Pigtails” is an entrancing forty-second groove built on a loop of a Porche vocal sample. On “Fire, Burglary, Flood,” a man talks of selling life insurance as a post-rock instrumental lingers beneath his dialogue. “Book of Baby Names,” another track of dialogue layered over an instrumental, blurs the line between reality and fiction: it sounds like this could be any given man off the streets of Chicago reading from his diary or book of poetry, but the performance-like delivery hints that the Bound Stems are recording this “true scenario” in the studio, having written the story themselves, from scratch.

With the constant presence of field recordings and dubiously manufactured scenarios, Appreciation Night judges “reality” in the simplest of terms. Sult’s tape recording, take-it-to-the-streets approach recalls the classic silent film, Dziga Vertov’s 1929 Man With A Movie Camera, in which a Russian filmmaker wanders Russian cities capturing the stories, the lives, deaths, repetition, and cycles, of the quotidian. More accurately, the film gives the feeling of a man wandering the streets when, in truth, the production involved concise planning, visual trickery, and highly conscious editing. Like the film, this music captures some honesty of living in a city through hidden architecture. The music and the stories imbedded in the lyrics feel quite real -- "these are our lives, this is our city" -- but the final product has been so carefully constructed and edited that one can’t help but question the truth in the “real” aspects of the album.

At forty-seven minutes and fifteen songs, the sonic complexity of Appreciation Night makes it a demanding listen; the very nature of these shape-shifting tunes requires sharp ears. The first time I heard it, I was washing the dishes in the kitchen and it sounded like noise in my living room. It grew on me as I typed on my laptop in the coffee shop. Now it succeeds pretty much anywhere, as a whole or in pieces, as confusion or as razor-sharp moments of lucidity. Sult remarks, “We tried to get as weird as we could get without being alienating.” Appreciation Night is certainly not alienating. With its full palette of great riffs, compelling lyrics, short but catchy grooves, and various field sounds that may or may not reflect a basically understood reality, the record is heavy, but impressively intriguing and accessible, and as such, well worth our time.