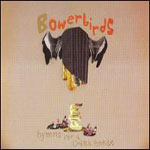 Hymns for a Dark Horse

The acoustic music of North Carolina's Bowerbirds doesn't attempt to re-invent the freak-folk wheel it aligns itself with but does succeed in laying down some distinguishing trump cards. The "cut live in our living room"-feel of Hymns For Dark A Horse is particularly endearing; turn it on in the corner of your study, go work in the kitchen, and believe that someone might be in your place playing a concert just for you, a calming folk soundtrack for a Saturday afternoon. An important part of that "authentic" live sound is the tasteful pairing of Phil Moore (the lead) and Beth Tacular's (the backing harmonist) voices. Moore's woodsy croon leads us through structural twists and turns and every time Tacular's sweet but hearty voice comes into play it enters with the presence of a small choir.

Behind the pipes are Moore's acoustic guitar, Tacular's accordion, and a plethora of old-timey odds and ends--out of tune pianos, wood blocks, kick drums, and violins--provided by producer and third member Mark Paulson (of underrated rockers Ticonderoga). The band dynamic conjures images of a musical family meeting up for a Sunday potluck and a lively revue of the folk classics, so, naturally, it doesn't demand too much from the audience, just keeps one dutifully on-track for another forty quieter minutes.

But then I wonder if such an observation is a slight against this record. Let's look a little closer. The record starts off with immediate appeal: the beautiful opener, "Hooves," plays like the funeral march of a Depression-era circus, Moore's sad voice walking ahead of the spare guitar and accordion backdrop. "In Our Talons" follows up strong with a catchy sing-a-long verse and a stunning harmony-laden chorus, which is undeniably charming. But halfway through the album, the songs lose some of their personality, verses blending into choruses, sonic palettes repeating themselves, and melodies becoming less obvious. Rather than remarking to myself out loud as I often do, "Wow I'm listening to [insert specific song name of your choice here]," I simply think, "I'm still listening to Bowerbirds."

I should come clean a little bit: this band, while seemingly happy to paint a harmless film over my domestic leanings, covers darker, more intriguing ground behind an inviting smile. When the afternoon is gone, the moon hovering in the sky, my headphones on and a little whisky in my blood, I notice some lyrical twists that I missed the first time around. For one, Bowerbirds are concerned with keeping this planet alive, cursing those of us--"It takes a lot of nerve to destroy this wondrous Earth" (from "In Our Talons")--running it into the ground with our selfish and irresponsible ways. Something of a solid alternative to the pseudo-mystical imagery of other folk acts. Getting darker, on closer "Olive Hearts," Moore rattles off clever but crushing lines of self-aware depression: "Cheers to the wives of drunks / Cheers to the husbands that tag along / Cheers to the miles it took to get here / Cheers to the nerve it takes to forget who we are." On "Human Hands," Moore considers, "There's a rusty prick in the tall grass / Where the barbed wire waits / For a blind horse in a gallop and its sealed and sudden fate. there is hate in the grip of our human hands / Yes, there is hate all around," and the utter sadness of that vignette makes me kind of want to kill myself.

Hymns For A Dark Horse's lyrics are impressive yet the music falls into a groove that defies many notions of song individuality and, for the casual listener, one of the best aspects of this band might go unnoticed. In contrast, a band like the Mountain Goats--with John Darnielle's down the center narratives and a voice that dominates everything else in the mix--demands us to pay attention to their words at once. Bowerbirds don't need to spend any time trying to sound like their North Carolina neighbors, they should simply think about the different ways they can subvert and re-imagine their folk formula as they did with their words. Instead of giving me the sense that someone is singing peacefully in my living room, maybe, every once awhile, I'd like Bowerbirds to make me fear that someone is burning the room down. Considering the somber yet riveting urgency of Moore's vocals and poetics, it would be an appropriate move.