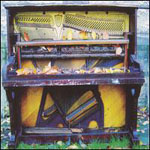 We Know About the Need

Something like 60 bpm and milkscapes: similar to Hood but initiated with a sentiment of escape, Bracken is Chris Adams of the Outside Closer (2005) and Cold House (2001) success, a guy that, alone, sticks to dolor as if -- even unintentionally -- it’s the only facet of artistic freedom a record like We Know About the Need can achieve. But during “Heathens,” Adams, more than a typical child of Leeds would push, chants, behind a strangely Prince-ian series of thuds, “We have our backs against the wall” in scathing monotone (if anything here is truly scathing), and at least he’s admitting the bath of tepid water he’s drawn for himself. By “Fight or Flight,” the conceit is lucid; the conceit is a dissatisfied shuffling of conceit, the chopping up of a reliable genre in order to depart from it, resulting in more of a blipped version of a reliable genre than a testament to Adams as a solo basement electronica artist. Is there any way to chastise this incarnation for honing their [his] comfort zone into a 10x10x10 imaginative little cube, no, a tool able to bump against and prod (and manipulate) a relatively common gland sitting squat on top of the mass, indie psyche? Easy. Bracken chastises itself. Of course, then, that weaves us backward into the record, because uber-diced tones and vocals besetting the patience and catharsis of meandering goth organs and fuzz seem to have already been a vicarious method of chastising previous Hood efforts.

And can we speak already of neo-trends inside our self-flagellating, intra-devouring indie world? Maybe, but we don’t have to get detailed, because it’s as subjective as it is easy to say that 2007 brings on the perfect pop attempt. We have a year for artists to cultivate brisk, two-minute bursts, indulging gooey whims with serious hands. Menomena, Of Montreal, Modest Mouse: these are the names of bands whose recent outputs simultaneously expand and contract, grinding melody into flashy, accessible bits while aiming at mythoi of atmosphere and noise. This is what Bracken tries, and this is how Bracken sounds tired. If Chris Adams descended into his cozy lair to try his hand at glitch and rid his fingers of Hood’s snoozy bleating, he found a safe median, driving his ideas years behind the curve, distinguishing himself from his previous band by tinier and tinier increments as the tracklist exhausts. The post-rock arrangements and forlorn tempo find organic sense in a digital world, just like Hood. The juxtaposition of smoky male and sugary female vocals wreathe “suitable” and “pretty” into one wet, falling measure, just like Hood. If I do drugs and listen to this, I kind of tear up, just like listening to Hood. Only, now this is 2007, and more suitable and more pretty leave Adams’s compositions starved for rigor, for restraint, for more release than a hardier drum snap can manage after a synth ditty blows up. That would be “Heathens,” again. You won’t have to look hard.

“Safe Safe Safe” is the best track on We Know About the Need because it’s the most characteristic of Adams at some sort of musician’s height. He layers mournful vocals over and over…over horizons of “Like Spinning Plates” wash, so much so that non-harmonies imbue the strength of solid counterpoints, and in that glorious serendipity of euphony, splits the song in two. The second “half” operates as sly remix, clankier, providing variety in dire moments of impatience. So, even though “Evil Teeth” may be shocking as a free jazz wank that mutates into another Hood song (that’s what I meant to say), “Safe” advertises and sells, which is about as successful as Bracken can get, especially when I put words in Adams’s mouth and tell him how much he misses his hiatal band.