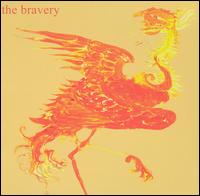 The best thing about writing for a site like CMG is the exposure I get to a lot of music I probably wouldn’t otherwise hear. Plenty of it, like Augie March or Tiger Bear Wolf, is excellent --- stuff that’s accessible and fresh, but a little too quirky for any kind of above-the-radar consumption. Conversely, just as much of it (think Wolf Eyes) is stomach-turningly awful. What I don’t get to hear very often is real mediocrity --- music that doesn’t make me want to slam my forehead against my desk in frustration and anguish, but at the same time music I’m sure I will never listen to again once I’m done writing about it.

This is why reviewing an album as plain and forgettable as the self-titled debut of New York’s The Bravery is so maddening: there’s almost nothing to say about this record at all. It’s not music you can really take a side on. It begs to be thrown on as background noise at a suburban high school party, not scrutinized on headphones by someone who actually has to rate and analyze it.

In the hierarchy of the 21st century post-punk revival, The Bravery sit just shy of the bottom, somewhere amongst The Killers, Radio 4 and the most recent Kelly Clarkson single. It’s worth mentioning The Killers here, as The Bravery most closely resemble a hookless facsimile of that Las Vegas band’s sterile Duran Duran-copping confection. But where The Killers are at least capable of crafting memorable choruses (infuriatingly memorable choruses, in fact), one could listen to The Bravery ten times in a single afternoon and still not be able to hum more than a song or two.

Inevitably, one of those songs would be opener “An Honest Mistake,” which sounds halfway between every New Order song ever written and The Bloodhound Gang’s “The Bad Touch,” with singer Sam Endicott droning on like Julian Casablancas’ less cool but equally detached twin brother. The song features a better-than-average chorus, and would probably do well at a club or a house party, but it’s the kind of tune that’s just waiting to get lost in the shuffle of a modern rock radio playlist. Basically, it’s hard to imagine anyone actually liking it.

There’s not much worth mentioning about the 10 subsequent songs; “Give In” features some reasonably good harmonies, and “Tyrant's" lyrics seem loosely politically, which I suppose is interesting given this subgenre’s usual obsessions with decadence and sex. Mostly, though, The Bravery’s 37 minutes come and go without making much of a fuss. It’s music so frothy and unsubstantial that you could practically meditate to it: listen to it often enough, and it just kind of floats away, even if you’re blasting it at full volume. It’s the kind of record that’s just waiting for you to forget it. And I, for one, will do just that.