Other Records by The Brokedown 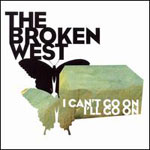 Envision the American West, land of deserts and desperados, scenic vistas and a horse and rider vanishing into a distant sunset. It’s a place with a curious sonic identity, crafted by the sunburned rawness of Townes Van Zandt and tumbleweed orchestra of Ennio Morricone’s The Good, The Bad, And The Ugly soundtrack. It’s a sound akin to country, though without its southern cousin’s pretensions. On their debut EP The Dutchman’s Gold, it’s a sound that Los Angeles band the Brokedown have begun to tap into.

While bands like The Beachwood Sparks and Lowlights have taken this sound to extremes (The Sparks’ debut plays like Architecture In Helsinki doing Byrds covers, while Lowlights’ work is decidedly eerie, burying Dameon Lee's disembodied vocals deep in reverb), the Brokedown play it relatively safe. The EP is filled with easy melodies and well-worn chord progressions in major keys, finding its character in enthusiasm and the thoughtful arrangements steeped in western country-rock. Tambourines and shakers accompany Rob McCorkindale’s dusty drumming, and Dan Iead and Ross Flournoy trade pedal steel licks with ringing chords. The production of The Dutchman’s Gold is a little rough and worn-in, giving the songs a grit and immediacy that only adds to their appeal.

“Sparks” is the countriest the band gets, with a picked acoustic guitar reaching higher and higher to counterpoint Ross Flournoy’s dry, linear melodies. It’s when the chorus hits that the band reveals its true colors: there’s a double clap rhythm and big, bright electric chords. “My Love Is True” follows it up with New Pornographers-style corkscrew guitar riffs and a heavy dose of Elvis Costello influence. The band pulls it off flawlessly, even managing to throw in some pedal steel at the fringes. Teary-eyed ballad “New Year’s Day” is a well-crafted piece of alt-country, finishing its chorus with an inconclusive 7th chord that refuses to close the door on broken “promises you’ve made.” Not every moment of the disc’s 28 minutes is inspired, as the superfluous guitar solo on “Lead Me To Water” attests, but the band’s work ethic remains respectably consistent.

“Please” is the only track that has some troubles, wedging an ill-fitting guitar lick between a hardnosed rock verse and a shimmering “ooh”-laden chorus. Something is lost in the transitions, though the individual parts are compelling enough. This is a band still finding its niche, and somewhere along the line, the Brokedown is going to have to decide if it wants to be a pop group reaching skyward for choruses or an alt-country band exploring the mysterious west. Then again, Wilco seems to be doing just fine.