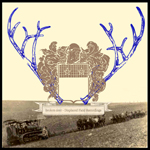 Mystique and How to Build It: there's an apocryphal story going around that R.E.M.'s first single, "Radio Free Europe," was sent to a radio station with no information whatsoever. All the DJ had to go on was a blank seven inch piece of vinyl. He played it, fell in love with it, and a legend was born. Or maybe not: I can't independently verify this story whatsoever through the usual channels, but the story fits in with the early R.E.M thing so well, who cares whether it's true? R.E.M.'s visual aesthetic and Michael Stipe's lyrics both contained a sense of obliqueness that was completely at odds with the summery music on wax. Sending a single with no information to a radio station, where one is supposed to promote their single, is the ultimate act of obscuritanism rubbing against accessibility, because after all it was designed to pique the DJ's interest. It worked.

Perhaps Halifax, Nova Scotia artist Broken Deer (primarily the work of singer/songwriter Lindsay Dobbin) has heard that story, too. Displaced Field Recordings arrived in my mailbox with no personnel information, and the only contact listed a Myspace website*. The record's handmade, roughshod cover (it appears to be made from a manila envelope) can be fastened with twine and a shirt button. There is no artwork on the CD itself whatsoever, merely a blank CD-R. Homemade CDs themselves aren't exactly new territory charted on Mount Unsolicited Promos (and it is a mountain, trust me), but the CD itself features only one track at 40 minutes long. There are fifteen songs on the album. There is no bio, no RIYL, no photos, tour dates, or PR company letterhead.

In terms of the basest pragmatism, it got my attention, but I also recognize that all of this alone is sheer gimmickry. Displaced Field Recordings earns its badge of Mystique with the music contained inside. Clearly influenced by Alan Lomax's early folk recordings, Broken Deer have recorded this album on the most primitive equipment available, either a hand-held recorder or someone's answering machine. The one long track ensures a minimum of skipping around and provides a continuity absent from modern CDs (or at least one that can't be so easily dispatched). The result is that, placed in the context of the twenty-first century, there is a distance from the material, rendering it intangible. It sounds like it came from another world, a transmission from another time floating around the nether regions of radio waves.

This sounds like retro-fetishism, and to some extent, it is. But save for "Blue Moon of Kentucky," which sounds as if someone is trying to assemble that old saw from a package with no instructions, the music Broken Deer make is informed by more recent developments. No-fi aesthetic aside, many of the songs, like "I'm Getting Old," "Makers of Dawn Tame the Field," and "Da Da Dum Da Dum" wouldn't sound out of place on Joanna Newsom's first record. There are electronic instruments, keyboards and delay pedals employed, prominently between minutes 8:06-19:00. "Coming of Age Funeral I," the patient, languid instrumental track that opens the album, carries a sense of doom far removed from folk music's Evangelic, apocalyptic vision.

There is a legend on the artwork that reads "Is there a quest for something that's been displaced, and needs to be found?" Broken Deer have made a record that certainly sounds lost in time, but frankly it also sounds like it wanted to be -- as if it stole away in the middle of the night some time ago, leaving only poetry in the wall by way of clues. For all the contrivances, Displaced Field Recordings never sounds like something else other than what it is -- someone in their room in the twenty-first century, singing their own songs. It is also one of the most striking and riveting records I've heard this year.