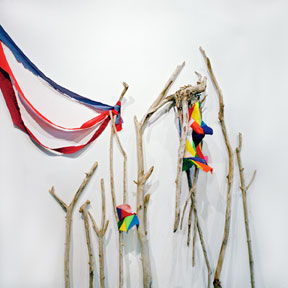 A Mountain Is A Mouth

Bruce Peninsula is a big band that actually sounds big—members swarm from the crevices between plush toms and crackling woodblocks to literally round out the mix, make it warmer. A Mountain Is A Mouth is something special, a clusterfuck arrangement of bandleader, guitarist(s), percussionists, and revolving choir (friends, admirers, and inspirations) that avoids the obligatory: nuance, screaming, Sufjan Stevens, a trumpet player and a cute cello player from Muncie, or otherwise. Melodrama abounds; lyrics typically touch on cataclysm and finality, and it’d be ridiculous to expect a fat swath of talented songwriters to not lean (really hunker) into a perilous bout of gospel and tormented hymns, but the sheer breadth of the album feels almost necessary. Earned. Like there will always be enough crucial parts to play and everything sounds big because it must.

So consider it good fortune if you get to see Bruce Peninsula live. Those of us outside southern Ontario will, unless leader Neil Haverty can suddenly wrangle the livelihoods of five to ten people into a worthwhile jaunt across the continent, never be able to catch the band on a good night. Though debut album A Mountain Is A Mouth plays as hard as it can muster with the dynamic of an ensemble outfit, relishing those moments of sudden transformation—as “2nd 4th World War” transitions to “Satisfied,” sylvan intonations to full-blown forest inferno, the songwriting could never be more obvious nor more stirring—it’s just proxy: a debut as balanced and concise as this could only come from a gaggle of musicians that would absolutely own a gallery setting.

And it appears they can.

Check the bespectacled lead choirperson Misha Bowers swoon, sans microphone, like she’s leading a séance, finding room in the stingy space for all the hippie spirits she’s sucking out of the woodwork. Front-guy Haverty flirts with a silly machismo that swings coyly between Tom Waits and Billy Gibbons, egging on the rest of his seething musicians to test the ecstasy he’s restraining. At moments, their legs give out (or mine do) but for the majority of “Shanty Song” the energy spun throughout the tight confines—art-draped, bleached white walls, camerahole, and Youtube’s tiny lookhole—is thick. Unless you’re a fucking bummer, you’ll have a great time at a show like that. Except there’s the greatest of chances you will never get to experience that in person.

If that sounds unfair, the unerring meantime leaves us with the group’s debut. Chin-deep in sing-alongs and cult aesthetics, the bombast of a song like “Outside/Inside,” though sharp, can slip too easily into whatever new age muck Akron/Family’s currently peddling. In turn, “Weave Myself a Dress,” startlingly bare given its surroundings, dreams up a hushed intimacy any venue would likely smash. Beset, as might be expected, by a uniform tone that dabbles so mercilessly between hard and soft, black and white, enough that the closing track could have been lopped of and none the wiser, the record’s still an exciting acquaintance with Toronto’s shiniest hope to stammer the encroaching forces of the Midwest So and Sos.