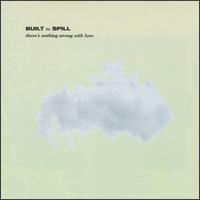 Built to Spill: There's Nothing Wrong With Love

While by no means as culturally (in)significant as, say, a Pavement or Guided by Voices record, few albums from the '90s, if any, can lay claim to the hybridization of uncompromising integrity and addictive pop thrills that lies at the core of Perfect From Now On. Sure, There's Nothing Wrong With Love is great. But to make the move to a major label and then let loose a thrilling artistic evolution… now, that's the frickin' Doug Martsch Experience.

What always drew me to Built to Spill was the disarmingly affectionate nature of their music, like a convivial gathering of friends, always tiptoeing the line between heart-on-sleeve passion and hands-in-pockets pursuit -- best coagulated, I think, in Perfect's "Made-Up Dreams." The whimsical guitar flourishes yield to a warm, buzzing strain of synths, weaving a musical magic carpet fit for a line like "Nobody cares what you dreamt about / Unless you dreamt about them." There's no division between lyrics and melody, but the song exudes a heady, intuitive mutualism that's perfectly organic.

And regardless of the band trimming down those epic soundscapes for 1999's brilliant Keep it Like a Secret, that magnetic, personable heart still kept time. It's been five long years since Ancient Melodies of the Future and, excepting a few standout moments, it remains a paltry offering of undercooked ideas: at once diluted and distilled into constrictive time frames, the band's homogeneous sound shrink-wrapped into bite-sized bastardizations of past glories.

Promisingly, You in Reverse marks a return back to the strung-out song lengths of before, but old time fans will still be in for a surprise. "Goin' Against Your Mind," for example, gallops past the eight minute mark, but its loose, intuitive delivery is unmarred by intrusive production or ambiance, signaling a change in approach on the band's part. Whereas on previous efforts these protracted lengths were utilised for grandstanding moments of musical metamorphoses, such wild evolution is kept in check. The band, now harnessing and focusing their energies while (paradoxically) firing them off into the cavernous swathes of an empty canvas, sounds ready to explore. The guitar solos that bookend the otherwise radio-ready "Conventional Wisdom" don't mutate so much as work through to the logical conclusion: that is to say, louder. Compared to immediate, overstuffed indulgences of, say, "Broken Chairs," You In Reverse leaves the epiphanies to the end. How fitting.

It's a subtle but instantly effectual re-evaluation of the band's sound that, combined with the absence of the overdubs, may force fans into knee-jerk disappointment. Indeed, while the guitars sound thinner, the drums have been given a more prominent, punchy role, punching the record's more unruly moments into the parameters of a rock song. Take "Gone," whose careening solo almost builds to a crescendo that seems destined to cremate its confines -- until, as if recognizing the impending self-immolation, the snares take it up a notch into -- wait for it -- a reggae beat, from the apocalypse to the dance floor.

The rest of the record works best when confounding expectations. "The Wait" annoyingly mirrors "The Weather" before having the rug pulled out from under it by a deluge of damaged guitars, and one of Martsch's most memorable solos, in an album full of them. Much of You In Reversesports insidiously catchy, expository guitar-led passages which, as opposed to enhancing the songwriting, often act to undermine it. The glistering flashes of fretboard lightning infuse electricity in the musicianship, true, but they also make us painfully aware of the lack of substantial hooks. No amount of innervations are able to colour life into regular cadavers like "Wherever You Go" or "Liar," the latter a risible attempt at pop formalities that goes nowhere and then decides to stay uninvited for tea and biscuits.

When the band is really on, the melodies don't attempt to balance the sunnier, leaner efforts of There's Nothing Wrong With Love with the atmospheric jams of Perfect From Now On; instead, it makes no attempt to reconcile these disparate tendencies into a composite whole, instead dissecting and portioning off them off into separate quarters. The result is a record that progresses as a sequence of dislocated sounds, an expressionist's puzzlebox that comes alive when distanced from one's preconceived notion of what a Built to Spill record should sound like.

Built to Spill are long overdue the commercial success they so justly deserve, but, bereft of an auspicious single (see also: "Float On"), You in Reverse is unlikely to draw in the masses, and, more pertinently, is just as likely to either disillusion or confuse longtime fans.