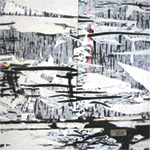 This trio is astounding, both for their allegiance to the most complex arena of free improv and for the way they make a very small palette (tenor and soprano sax, contra bass, and drums) work for them. In width, if not in tone, they remind me of Peter Brötzmann’s Balls (1970), but even then Brötzmann achieved the affect through implied violence and escalated playing, whereas this trio works it through filling ambient space with all manner of noises produced untraditionally on traditional instruments. In that sense they’re more like contemporary free jazz, except (again) many younger groups employ electronics. Which, and I’ve said this before, your music doesn’t get more points because you can do it au natural, but just listen to these three guys play their instruments. On the first track alone Butcher manages weirder clipped synthy-spasms than Black Dice did on Beaches and Canyons (2002), Müller does shit with a bow that is confounding, and van der Schyff sounds like Han Bennink and John Bonham fighting.

Which would mean shit all if it were just weird, but this trio (on this live album, incidentally) employs the noise to fascinating ends. Where a lot of traditional free improv embraces mood over narrative these guys are telling all manner of tales by working on small vignettes and builds within the different moods each piece cements. “sibila e succhia” starts relatively quietly, going for dynamic and playful interplay between the musicians; it’s a track where van der Schyff really shines as he tosses in funny little woodblock and tom hits that echo classic drum riffs before launching back into more traditional free improv territory. In the middle Butcher does all these neat things with his horn, making it sound like a vaccum, but more fascinatingly making it sound like a short looped 0 decay sample. “magiC CloCK maCHine” (which contains some furious Dolphyisms about four minutes in) slowly expands both in register and cymbal wash, blooming across the stereo spectrum as the song progresses. The melodies and rhythms, while never becoming something recognizable, gel more and more until, perhaps unsurprisingly given the genre, they collapse again.

“Sharpening the Windings until they roll up, roll up, roll up and snag on the point of the tear” is, as the lengthy title might corroborate, the album’s centerpiece, the most glowing example of the band’s ability to coax narrative and mood out of synergy and strangeness. It’s a gorgeous track, especially the build after seven minutes where you can hear the thing building in all these weird and counterintuitive ways. The opening to “Taktgebertendenz” again plays it quiet, and while Müller is a monster all over this album for the texture he gives the other two musicians, here the tense way he provides the bedding for horn whispers and deep rumblings is hypnotic. It’s also a testament to how pristine the sound is here; the acoustics in Vancouver’s Western Front must be sublime, because this album sounds studio quality.

This stuff is fantastic as it bridges a gap between free improv’s emphasis on mood and conversation and a narrative stance that sees those conversations going somewhere, though often not where they might seem like they should go. “Gone, Goner” closes the album on an appropriate note therefore, pretending to be traditional jazz before the band begins to deconstruct the thing at the seams. When it ends, the audience laughs—the first time we hear them—and it’s earned, because it’s also a laugh of relief. Everybody totally thought they were going to go fucking nuts; instead they leave the story unfinished.