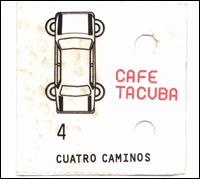 Café Tacuba have been around forever (their first album blew away Mexico’s music scene way back in 1992) and yet we don’t ever hear their music north of the border. Perhaps, after failing sniffle our Spanish 202 final exams, we’d rather hear some Brit-popper wail away in the language we understand. However, if Café Tacuba’s latest album is any indication, we’ve been missing out on some fantastic music; without question, Cuatro Caminos is one of the 2003’s best releases.

Café Tacuba’s greatest strength is sophisticated song-writing. With track 5, "Camino y Vereda," these guys prove that they know their music theory. The band floats your standard 4/4 vocal melody atop time-signature-defying percussion and chords. The result? An extraordinarily intricate rhythm study that sounds both jubilant and effortless. Track 6, "Eres," features the year’s most-heart-breaking melody. Furthermore, Café Tacuba surrounds this melody with strong counter-melodies in the bass and lead guitars. The various interlocking melodies all combine to jerk every tear from your weepy red eyes. Even "Que Pasara," the album’s simple balls-out rocker, is perfectly arranged. Bouncy guitar line + catchy bass hook + in-your-face vocal wailing = kick ass song. One final note on song-writing: weaker bands overdose on electronic effects, depending upon laser beams and vocal manipulations to carry their songs. Café Tacuba uses electronic tweaking sparingly, but to great effect. Throughout the album, the electronic manipulations only enhance the songs, by furthering the melody and providing contrast to organic sounds.

Some critics have knocked Cuatro Caminos for cohesion problems. I usually find this kind of criticism rather cheap and unfounded. Certainly, this album’s songs vary significantly in genre and texture (from organic rock to electro-pop to near-ambience); however, every song clearly belongs to Café Tacuba. If anything, the diverse song-writing helps make this album extremely re-playable.

Unfortunately, Cuatro Caminos suffers from some weaker moments. "Soy o Estoy," for instance, bounces around like a windup toy. By the time the song finally congeals into something coherent, you’ve almost reached the end. "Desperte" can be described as pretty, but certainly not solid. The song ambles about rather lazily for a couple minutes, before the band saves itself with beautifully interwoven vocals. Finally, the album loses some points for occasional goofiness. I love goofy pop as much as the next guy, but this group’s strongest moments are their serious moments. Next to the exultant "Hoy Es" or the atmospheric masterwork "Encantamiento Inutil," the goofy tracks seem second rate. They’re not bad, per se. As you listen to the album more and more, however, you’ll find yourself skipping over these songs.

Finally, a word about the Spanish language. I know … we all hated our respective mandatory Spanish language classes. But folks, Cuatro Caminos ain’t no second-rate Spanish 202. This album is rock music at its very best: technically solid and emotionally inspiring. Naturally, the Spanish lyrics will take some adjustment, but ultimately your investment will return tenfold. Don’t let the language barrier prevent you from enjoying some genuinely great music.