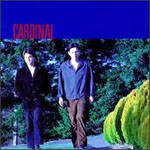 Was there chamber pop before Belle & Sebastian? What about the precursor to the Wrens’ blend of harmonic beauty and chaotic breakdowns? Whatever happened to groups like the La’s and the Stone Roses? The missing link might just be Cardinal: a self-titled debut by a band who spontaneously combusted soon after, the album’s release in 1994 fell just between the dying gasps of Britpop’s precursors and the rise of American indie rock.

From the sound of things, tensions were already running high between Richard Davies and Eric Matthews, the duo behind the project. Cardinal is a band without an identity, or rather, one with several. Opener “If You Believe In Christmas Trees” is perky pre-B&S (or post-Love) chamber pop, complete with strings, stiffly strummed acoustic guitars, and a brief horn solo which appears without warning. It’s a great song, one of several on the album worth finding their way onto mixtapes and summer soundtracks, but the band’s splintered musical vision makes the listener work hard for the rest. The next track is a murky exploration of slowcore, matching eccentric harmonies with a sludgy electric guitar. While it couldn’t quite pass for a Low b-side, “Last Poems” certainly falls far from the previous track’s pop glee.

The album’s other sore thumb is the brief instrumental piece “Public Melody #1”—a bizarre pseudo-classical work that feels hopelessly out of place, especially the “Legend Of Zelda”-esque breakdown. Cardinal can’t seem to decide if they want to be dark and aggressive or bright and pretty: “Dream Figure” has plenty of frustration pent up in its distorted guitars and restrained vocals, but then “Tough Guy Tactics” belies the band’s prior seriousness with sarcastic lyrics and power-pop riffing. On its own, “Tough Guy Tactics” is enjoyable enough—there’s a humorous line, “And your new girlfriend is seventeen/sweet and holy/seventeen,” but in the overall picture, Cardinal fails to be coherent.

The album’s best song is “You’ve Lost Me There,” a veritable diamond in the rough. Davies and Matthews trade vocals, with Davies singing the verses before Matthews sings low, strangely beautiful harmonies with himself. A brief guitar break divides the chorus from the rest of the song, in which the two singers join together to plea, “Come with me tonight.” It’s impassioned and well-crafted, the kind of song you can listen to for hours without noticing the time pass. The demo version, a solo acoustic take sung by Matthews, is also worthwhile, though most of the bonus tracks sound like lo-fi Love outtakes. The exceptions are the two versions of “Say The Words Impossible,” which share the same sense of exhaustion and unique counterpoint harmonies The Wrens have so effectively mastered. There’s enough to love on Cardinal to make the album worth pursuing, especially if you’re interested in filling in some influence gaps—but not enough to rank this among the classics it references.