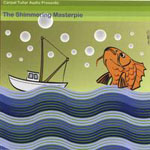 Or, you know, jokingly! He’s not sure!

It’s a strange little record. Carpal Tullar is really Chris Tullar, a North Carolinian (Carolinian: word or not? Debate.) weirdo recluse who writes quirky pop songs and produces them into a sort of lo-fi psychedelia. Apparently he’s scared to perform his songs live, but that hasn’t stopped him from scoring a few plays and putting on a musical review. This is his fourth album, after the adorably titled Sentimental Poopy, Antidisestablishmentarianism and Mock Balderdash. This guy is cute as shit.

Tullar has filled The Shimmering Masterpie with tunes: lilting guitar lines tumbling over circular melodies floating above bobbing borrowed Beatles basslines and pattering drums that sound like giddy nodding heads. He summons Ben Folds, the Flaming Lips, the Shins, a smattering of Belle & Sebastian, and, perhaps most often, They Might Be Giants—a host of the poppiest and most tuneful pop bands of recent indie history. These influences collide and coalesce with varying degrees of success. “When The Newness Is Gone,” for example, crams about four different songs into the first minute and a half, a geyser of songwriting innovation that dazzles for two minutes and grows cumbersome by four.

But that track is all the way at the end, which, by Shimmering Masterpie standards, means it doesn’t really count. In other words, this album is woefully frontloaded.

Maybe I’m overstating that. Tullar kicked himself, though, by starting the album with the album’s two finest compositions. “Velocity Beach” is a breezy stunner on the verses, with a faux-jubilant chorus that can’t wrench the melancholy shoulder shrugging of Tullar’s vocals. “My Exotic Headdress” is the album’s clear standout, anchored by a hypnotically fuzzed-out funk lick, a host of “doo doo doo”s and a chorus that’s not afraid to flip out a little. Tullar’s other tracks fall short of this high mark, but that’s not to say they’re not good.

Many of them could be described as “whimsical” or “quirky.” I hate whimsical and quirky shit, so this album was at an immediate deficit. Indeed, I’ll admit, the cheeky whiteboy homage “Hip Hop” made me a little queasy. But “30 Seconds to Fred Frazier’s Death” is a winning take on the jazz trumpeter’s mid-solo embolism, and the subversive themesong breeziness of “Unfancy Bill” (coupled with lyrics like, “It’s Bill! Quick-to-rage Bill!”) actually made me laugh out loud. And that shit doesn’t happen often.

The rest of the album is pleasant enough, but too often the whimsy lacks charm. Tullar throws a million more hooks at you throughout the remaining songs, but few catch with the insistence of “Velocity Beach” or “My Exotic Headdress.” Tullar’s a talented dude, and this is certainly a fun album, but even with a couple great tracks and a smattering of likable ones, it’s hard to get fully behind an album with a full minute of people saying the word “Djibouti.” A little whimsy goes a long way; I’d love to hear Tullar sing without a smirk on his face.