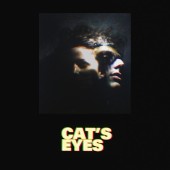 It’s certainly fitting that Cat’s Eyes, the eponymous debut from the Horrors’ Faris Badwan and classically-trained soprano Rachel Zeffira, runs the approximate length of a short film. In just twenty-eight minutes, the album flutters between baroque pop and orchestral balladry, assumes puerile sass as well as adult introspection, and features male/female vocal leads in equal part, all of it seeming linked by a grand collective bid to be categorically cinematic: for its friskier bits to buzz like highway-chase montage music, and for its tender moments to be so effectively emotive they could transmit heartbreak into a scene anchored by dime-store actors. As a whole, it haunts and hisses like a shuffling vintage jukebox, dedicated in spirit to vinyl times but merging in practice the extremes of that era with a flurry of found sounds. Taken piece by piece, as is the recommended way to digest the record, it provides glimpses of brilliance and dizzying nuance.

It all kicks into gear, perhaps by the boot spur of a Tarantino character, with “Cat’s Eyes”—a title track on an already self-titled album, as retro as Davy Jones singing how his band likes to monkey around. Essentially a chugging getaway anthem, the song revolves around a Roy Orbison riff and its send-up delivery, which mismatches Badwan’s gloomy baritone with cartoon lyrics and reduces Zeffira’s range to monotone girl-group asides. The kind of senseless, swaggering intro that one could easily imagine an early-‘60s A&R executive forcing on his newest act as a sort of one-off caricature, “Cat’s Eyes” is as fun as the record gets—and it makes a quick and sharp argument for this duo as garage rock devotees, which erodes as soon as the second track begins.

Instead, “The Best Person I Know” is lush seashore of electronic sound: synthesizers roll in like ebbing waves, chimes improvise in the distance, Zeffira’s bedside harmonies infuse childlike lyrics (“You’re the best person I know / There’s no one else I’d rather sit next to”) with that Aesopian quality of finding truth in utmost simplicity. It’s a pristine love song, brutal in its beauty and fragile to the touch, that upon repeated plays of this record begins to function as a sort of palette cleanser between the rollicking opener and the symphonic “I’m Not Stupid.” Built upon delicate violins, a desolate oboe, and glassy keyboards that echo like water droplets in a cave, “Stupid” merges an indelible pop hook with distinctively operatic movement. This is largely due to Zeffira, who arranged the orchestration, plays all strings and woodwinds on the track, and delivers a painfully restrained vocal performance all at once. “I know I’m not a pretty girl / I’m realistic” goes one verse, its despondency as potent as was the cheekiness on the first track and the mushiness on the second.

In the course of nine short minutes, then, Cat’s Eyes perplexes as much as it delights, sporting a thrift store attitude toward accessorizing its every genre stretch with imaginative subtlety and professionalism. So it’s no great matter that the last twenty minutes don’t quite reach the same heights; rather, the album’s unfolding gives a chance to judge which experiments work, which bewilder, and which might merit further exploration if Badwan and Zeffira collaborate again. What this album cumulatively proves is Badwan’s mastery in interpretation, whether goofing on his musical targets (see “Face in the Crowd” for a great go-go spoof) or paying them homage, and Zeffira’s obvious skill in instrumentation. Even a song like “Sooner or Later,” the easiest thing here to immediately dislike thanks to Badwan’s grotesque vocal tones and a chugging riff that sounds like Weezer’s “Hash Pipe” stuck in molasses, draws on each member’s respective talents.

Through the album’s second half, this chemistry breeds a few more inarguable triumphs. “Bandit,” a mariachi death march that gives way to snakecharming oboe lines and spaghetti western whistling, has lyrics that warn against evil but an otherworldly arrangement that seems to condone it. “The Lull” and “I Knew It Was Over,” meanwhile, are textured, concise, and touching; the tinkling pianos in the latter and fluttering harp in the former are the types of adornment that deserve attention while listening and acclaim while reflecting. Even “Not A Friend,” as dumbly singsong as something like Brian Eno’s “I’ll Come Running,” manages to evoke the beach, another telling sign that Cat’s Eye’s achievement in sonic precision effectively liberates this entire work from the constraints of space, time, and mood. That these starkly dissimilar yet uniquely wondrous tracks follow one after another renders the question of what the band might do next completely open-ended.

It all ends so quickly; nothing is given time enough to fully settle. Badwan inhabits three separate characters through the songs he sings and Zeffira about five, which lends this project a sense of role-playing as opposed to full narrative construction, and certain critics have written off the genre-hopping as too unshackled and short-lived to be anything other than rote imitation. But despite all the clear influences—as well as the intriguing musical backgrounds that make Zeffira and Badwan such a puzzling pair—where this album comes from is ultimately far less interesting than where it brazenly goes.