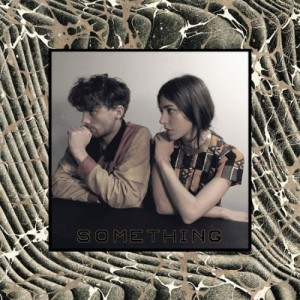 Like many artists who’ve erupted commercially on the strength of just one song—or in this case, just one ad—Chairlift’s sophomore effort Something is exceedingly safe in its risks and personality, succeeding in meeting its goals but setting the bar far too low on them. Something is just okay, in the same way as Congratulations (2010) or Cults (2011), in that they don’t do anything wrong but don’t really risk doing anything wrong in the first place. I certainly have no idea how much of a say corporate overlords Columbia had in the production of Something, but it feels like Chairlift scuttled any ideas that might risk being construed as “out there” or “unmarketable.” Which is to say that these are a lot of instantly palatable, easy to digest songs that seem to be made with the express purpose of being instantly palatable and easy to digest.

Something feels like it’s trying hard just to toe the line between hip chicness and mainstream marketability. They throw some musical brands and familiar idiosyncrasies into their composition that I like, but they still feel like maneuvers pulled off not because they like them or think they are poignant, but they think I will like them or think they are poignant. Looking at it is a virtual wine list of other bands circa a year they put out something popular: a couple of fat bass lines underlay twee-ish music a la Twin Sister’s Color Your Life (2010); two or three tracks are done at the breakneck speed and with the post-new wave, post-surf rock flair of the Drums’ Portamento (2011); a handful of hand-drummed percussion numbers mimic what Taken by Tree’s East of Eden (2009) and High Places’ self-titled debut (2008) perfected; one or two songs are foggy in their production; and it’s all pulled off with enough mainstream life to pull in some soccer moms who listen to Imogen Heap and Feist’s The Reminder (2007).

While those are, for the most part, skills a band should have (summoning the occasional funk bass line or producing something “hazy” sounding shouldn’t be out of anyone’s abilities), they’re not what actually makes any of those artists interesting or likeable—an awfully important point Chairlift seems to have missed. This, paired with a lack of any real artistic flair, makes it hard for a band like theirs to stand out amongst a large group of hopefuls all gunning for the same thing.

Something starts out strong at least, placing four of its best songs at the top of the order, though in many ways they are also their most derivative. “Sidewalk Safari” pulls the wiggling, zithery guitar work St. Vincent is often known for through the ’80s referencing tones of Chromatics; while singer Caroline Polachek offers one of her better vocal performances, it’s a bit lacking in terms of lyrical content, the first-person account of a person hunting down a specific pedestrian in their car somehow missing a motive for this act. “Wrong Opinion” uses bursts of vaguely tropical percussion in the same way Lykke Li’s “I Follow Rivers” does, except it’s overdone to the point it takes all melodic playfulness away from Polachek’s vocals and gives it to this looping audio sample, marginalizing her contribution in the process. With a funky bass line and a conservative beat, “Take It Out On Me” feels like the track they might really let loose on, but minus a little unhinging Polachek does on the second verse, the result is underwhelming. And while “I Belong In Your Arms” is one of the most energetic songs on an album that finds itself at a slow, trudging pace a bit too much, it also sounds pretty similar to Summer Camp’s “I’m Better Off Without You,” a distinction that isn’t meant as a compliment.

Following those potential hits are a run of songs that Chairlift provide neither the instrumentation or gumption to turn into something remarkable, cultivating them just enough to make sure they are inoffensive, passable filler. The lone exception is “Met Before,” a chugging guitar number that explodes with the chorus into a mess of springing synths and Polachek straining her voice to its ends, conjuring both Surfer Blood jangle pop and late-‘80s hair metal with equal vigor. Its vigorless counterparts are less fortunate, incapable of eliciting the same reaction positively or negatively. “Ghost Tonight” accentuates Nite Jewel-esque keyboards, an aesthetic choice that’s successful in Ramona Gonzalez’s work when it’s given an entire album to maturate but sounds indifferent and languorous when left as a one-time dalliance as it is here. “Cool as a Fire” is supposed to be an emotionally hefty song but is difficult to decipher clear meaning from; what is to be taken from “Now that I’ve found you I don’t have a choice / With or without you I don’t have a choice” is still a mystery to me. From there, “Turning” sounds like the already dreamy indie pop of Puro Instinct after taking a handful of sleeping pills, “Amanaemonesia” and “Frigid Spring” are largely forgettable, and the court drama of closer “Guilty As Charged” is marred by the obnoxious noise in its chorus, an excess that ruins an otherwise good song.

The disappointing thing with all of this is that their shortcomings on this album are not due to a lack in their abilities, but in their boldness. Hypothetically, they’re isn’t that much separating this band from Braids, and the differences that do separate them aren’t exactly chasmic. Polachek can sing, at least when given the chance to actually let loose on a song (“Take It Out On Me,” “Met Before”), and multi-instrumentalist Patrick Wimberly isn’t bad either, as the problem isn’t his ability to play and produce but his ingenuity in doing so. In other words, Chairlift are perfectly capable of producing a really good album; Something just isn’t it.