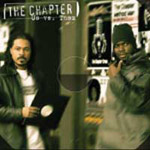 I’ve gone through several stages in my life where I refuse to listen to anything but The Roots’ Things Fall Apart. It’s a great album, and along with Illadelph Halflife makes a strong argument for the Roots as one of best hip-hop groups of the second half of the ‘90s. Unfortunately, the post-millennial releases from Black Thought, ?uestlove, et al have moved away from the organic funk and soul of those breakthrough albums. Luckily, ?uestlove has his ear to the streets and his heart in the right place, and thus we have The Chapter: the Las Vegas-based, Chicago-bred combo of MC Verbal E and producer/multi-instrumentalist 3Sixty. On their debut album, Us vs. Them, the two make a grab at the kids like me who still have Illadelph close to their turntable.

This is not to say that Us vs. Them in fact matches that album. In fact, it falls a bit short, but not for lack of trying. If anything, the band is trying too hard; there’s simply too much here to really appreciate the artistry of many of the tracks. It’s my least favorite critical reaction to this album (even worse than the reviewers who complain of the brevity of EPs), but The Chapter just haven’t figured out when to stop and cut the album down. At 17 songs and 65 minutes, Us vs. Them feels at least 20 minutes too long.

It’s a shame, too. 3Sixty’s beats are a great mix of soul and hip-hop, merging original instrumentals with samples. Synth-ed out “Life in the City,” the high-hat shuffle of “Time is Now,” and the rave-up funk of “On Ten” all sport great beats, but he doesn’t have enough of a range to keep it up for 17 tracks. It’ll be interesting to see what he cooks for his scheduled appearance on MF Doom’s planned Leftovers album. Verbal E is an equally impressive MC, with a deceptively subtle flow that he flips hard on a couple of the tracks here. Give him another album and the writing will match the skill; but, again, there’s just a bit too much here without enough changing it up.

As it stands, The Chapter are off to a good start. With ?uestlove’s support, a dauntingly long debut, and some very positive press, we’ll no doubt be seeing plenty more from Verbal and 3 in the next few years.