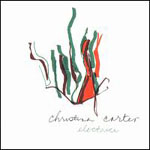 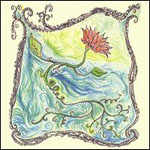 Watching Chet grope (the only verb for it, given the tangled webs Krug weaves) his way through 2000 words that compare Shut Up I Am Dreaming to American Idol, Oblivion (I am all Master of all guilds now, Betz!), Hemingway and Pynchon (all while name-dropping “Spence” like the two were sipping scotch at the clubhouse while he wrote it) is a blast, but so what am I going to do with Charalambides? Because if Sunset Rubdown has managed to color in gravity’s rainbow, A Vintage Burden is just grave, and the only things shining through Tom and Christina Carter’s clouds are heaving gasps and muted melancholy. Lulling, taunting, replacing my memories with their own dark secrets, it will force me to invoke my vertigo (I can’t sit in the nosebleed section of the SkyDome without panicking), corn fields, playing Joni Mitchell at really lows speeds, really complicated math, and locker-room conversations between the Four Horsemen of the Apocalypse (Pestilence: “I’ve got to duck out early tonight to pick up the kids from ball practice”).

That last may seem like a joke, but it isn’t, really; there’s a complex and well-executed line this album (and, really, all of the band’s recent output) walks between unfathomable, apocalyptic misery and the way sadness can exist even in the most mundane of pleasant moments: you have to be here, but you could also be here, or here, and the emotional opportunities at each and your regrets for missing out on the alternatives are equal, which means choice is a zero-sum game. To further force the point home, “here” is pretty meaningless in this wash. I’d really like to draw myself two maps: one for the emotional clusters this thing builds out of scrap heap into giant, spinning globes that clatter diatonically inside my head, and one that simply allows me to understand the actual process of this music. Signposts are scant. Eight minutes and twenty seconds into “Black Bed Blues” a guitar begins to play actual almost-blues scales, and I have to latch onto them like a parachute. During “Spring” and “Dormant Love” pleasant melodies surface; I can finally focus my eyes enough to read the cheat-sheet equations I had written on my hand. “There Is No End,” thoughtfully placed at the beginning, coos through its wading pool of reverb, guitar, and voice, distending the words “There is no end to your beauty.” Meanwhile, I’m quite possibly disintegrating. Always poised on the precipice of dissonance, the Charalambides cheat chaos by first situating you their warm bed; they only unravel the linen’s thread count after you think you’ve arranged the pillows correctly.

If you’re familiar with Unknown Spin or Joy Shapes, this is what you have come to expect, right? Intense, complicated, tonally driven washes of reverb, voice, and guitars—and that’s it. And yet… look, there’s no way to write this review without dropping my most dreaded phrase—“more accessible”—so here’s a really incredibly elaborate qualification that will make all of us feel better tomorrow morning. If I read Amir’s article on objectivity correctly, I can paraphrase him this way: judging an album is about “getting it,” where “it” is knowledge of some combination of the history of a genre, the extent to which an album culminates/balks expectations, and the production of music. Enjoying an album is never about getting it, which is why, to use Amir’s example, I can love “Toxic” without having to feel conflicted about liking a Britney Spears’ song. In other words, there is no such thing as a guilty pleasure, because pleasure itself is not necessarily a calculation of worth. I think Amir and I diverge on the specifics a little—he seems to believe in epistemologies that are wholly objective, whereas I believe “objectivity” itself to be a suspect subjectivity—but, generally, I wholeheartedly agree.

The problem, for me, occurs when something moves so far into the realm of ubiquitous brilliance that “challenging” becomes a very weak term to describe the amount of emotional investment it will require, and “getting it” on an objective level we can articulate is almost impossible. Or, to make the point less theoretical, it doesn’t matter how high a grade I give to Homotopy To Marie (86), OV (84) or Sheer Hellish Miasma (87), I’m not pulling any of them off the shelf to listen to that frequently, nor is it easy, even armed with all of the objective criteria in the world, to explain why a better-than-average Halloween sound effects recording, a skipping record of metal riffs, or an infinite series of powerchords might just be able to hit your heart strings like a well-tuned piano.

But they can, and they will, and make no mistake, the Charalambides also make this kind of difficult music. Shit like this is tough, it’s an investment, and I don’t say that to fluff my own feathers; I say it because recommending this sort of music is equally tough. It is brilliant, yes, but salt to taste. I personally don’t want to be near a hit play button with Joy Shapes in the dock without 24 hours to prepare myself emotionally. It’s exhausting, and the rewards I may get demand complete immersion in its aural environment, which is itself an intimidating prospect, because where Playthroughs may coddle me, and Haunt Me, Haunt Me Do It Again may allow me fantasies of comfortable places, Joy Shapes flays me alive. So when I say that A Vintage Burden is more accessible than Unknown Spin (88) or Joy Shapes (91), it’s kind of an admission too: I’m not rating it as high—it’s not objectively as good—but I’ve already listened to it more times than those other two claustrophobic masterpieces combined.

Because here’s the thing that surprised me: A Vintage Burden, despite how incredibly dismal it is (and it really, really is) happens to be, relative to its predecessors, actually kind of pleasant. Of course, maybe that’s the joke: the frolics of spins and joy shapes sound like death but burdens are light. Conceptually, I wonder if the whole point of Charalambides as a project is to explore the root of the role sadness plays in our emotional maturity by executing complex and hypnotic pieces of music that force us to confront the reasons we might feel sad in any given situation. Because when “There Is No End” skulks out of my speakers, hinging on a simply intoned bass-note pattern accented by slowly lilting chords, I’m already woozy, confused, and blinking. The speed with which these two musicians are able to draw you into their tapestries has always been one of their most impressive traits, and even if the harmony vocals and pedal steel of Heather Leigh Murray are somewhat missed—her contributions always seemed to suggest that music was dissolving at the fringes, especially on Joy Shapes—“There Is No End” still works like a funnel, spinning you faster and faster into this sad and sonic realm.

“Spring” follows; the first indication that this album is noticeably less conflicted than Joy Shapes. Carter’s melody is positively arching by the standards of the band, and her and Tom’s guitars weave around her voice like a Caduceus engraving. Both are incredible with momentary accents in their approach to guitar; soft bells, synth noises, and buzzes give the song a sense of space. “Dormant Love,” however, is the biggest surprise here. Over a pleasant acoustic guitar two-chord riff, Christina actually sings the song in a measurable bpm, and it sounds somewhere between a track from Saturday Looks Good To Me’s All Your Summer Songs and one from George’s Magic Lantern. For any other band, this would be a sad moment of eloquence; for Charalambides, it’s a positively euphoric pop tune.

And then the back-to-back miracles of “Black Bed Blues” and “Two Birds.” “Blues” begins as a dual guitar riff featuring knocked strings mocking percussive noises, slid chord riffs that give a stilted sense of momentum, harmonized chords augmenting the original melody, phrase samplers (or overdubbing), and some prog-ish riffage that leads into a section of amazingly deft guitar leads that envelope the original riff in reverb and echoes. It’s a simple basis for a song, but without the endless creativity from both players, as well as their careful attention to not let that creativity broach the overall sullen tone, it might have failed miserably. It’s the most obvious indication of just how powerful and skilled this band is; with all of the engaging clatter going on, you probably won’t notice that you’ve just been listening to 17 minutes of the same riff. And then, just as quickly, “Two Birds” inverts the polarity; a beautiful exercise for Christina’s voice, she climbs sad-yet-hopeful mountains of chorded guitars and echoing stray notes. The guitar duets over the mid-point of the song are just as sprightly as the ones in “Blues” were chilling, but even better is the emotion in Christina’s voice when she re-enters the mix. The two songs together neatly divide the overarching tone of the album: there is sadness in isolation and sadness in hope. Fittingly, “Hope Against Hope,” where even the audible breathing seems forlorn, answers the silent question posed by the dichotomy: melancholy is the most obvious of emotions, however expressed.

The equation isn’t so simple as saying A Vintage Burden isn’t as good as Unknown Spin or Joy Shapes because it’s happier; it’s just that in sacrificing (a slight amount of the) gravity, the band has also inevitably sacrificed some of the concept that unified their previous albums into unprecedented explorations into the darkest misery of the human psyche. Which is fine, because even those who build electric chairs and iron maidens need hugs once in a while, and even those adept at producing cogent articulations of the apocalypse like to discuss the weather over coffee before they get to work. A Vintage Burden’s embrace is still emotional, still heartbreaking, still sad, and at times still chilling, but somehow, it’s less of an exercise to wrap your arms around it.

And see, Clay? I got through the entire review without calling it “ethereal.”