1. Upset Army
2. All Ghosts to Medicine Counter Four
3. Middleyurt
4. The Good Sword
5. 3 Speed Limiters
6. Standard Issue Grief
7. Love Letters in the Age of Steam
8. The Harder It Hits
9. Who Is Iron God?
10. The Psychic Reader 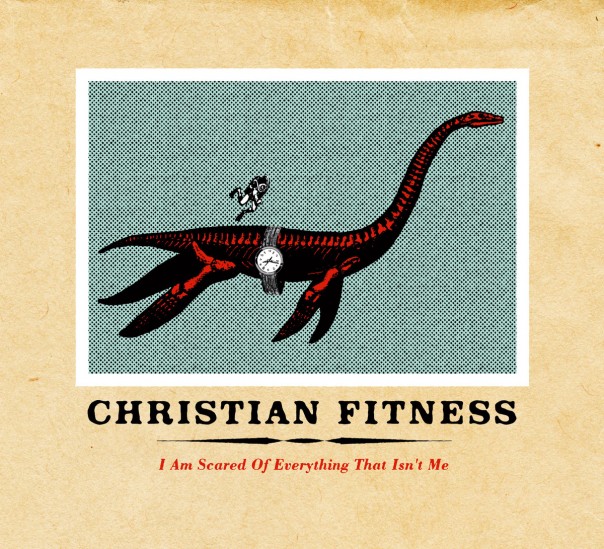 Christian Fitness: I Am Scared of Everything That Isn't Me 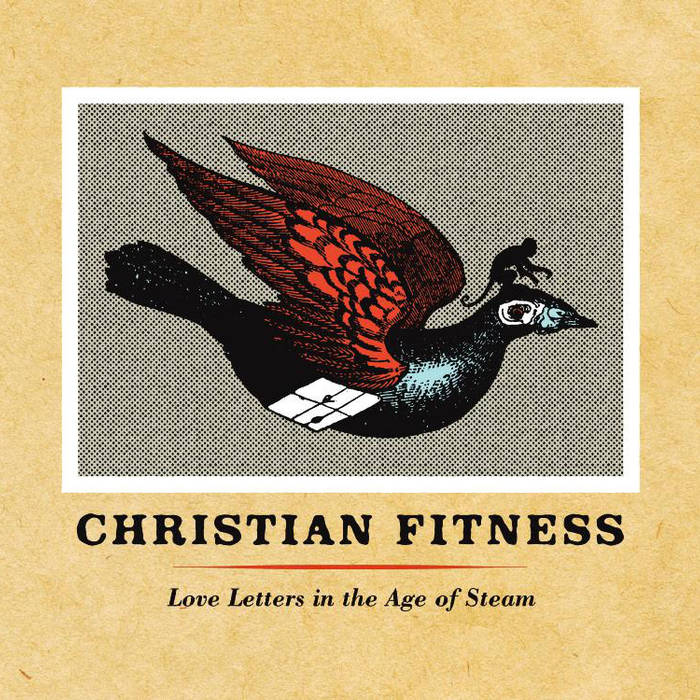 Love Letters in the Age of Steam

“Don’t do it, Corey. Oh, don’t do it,” they’re saying, in a Drake cadence. My crew, I mean. We’re standing on the corner of your Internet, and I’m wondering if I should go in. They know I love going in. In fact, they know I’ve taken a vow to never stop going in.

I throw my hood up, think of telling them, “Nah, I can’t go in.” Not in there, not again. Not even if I drop another bomb-ass, obnoxious review disguised as a self-aggrandizing dialogue—not even that could save this criticism thing for me this time. It’s boring in there, man. Dangerously, deadly boring. More music to be heard than ever before in human history, but everyone following the lead of one or two heavies and just reviewing the same agreed-upon five records, every week, until the end of time. Meanwhile, on Twitter, music critics jerking themselves all the way to carpal tunnel—and me? I got out just in time to save my wrists.

But then, those guitars hit me. Andrew Falkous strikes a power chord, smothers it in a home-brewed marinade of bile and overdrive, lays it lovingly on a silver serving-dish, and lifts the domed lid. The second the scent hits my nostrils, I’m Pepé Le Pew mainlining some Frenchie skunk’s parfum straight to the vein, all hearts for eyes and the bulging vessel itself popping right through my chest. This is, after all, a kind of love letter.

Love Letters in the Age of Steam is Falkous’s second record as the one-man band Christian Fitness, and his tenth proper LP. It may also well be his best album. Yes, that includes mclusky’s stone-cold classic run and Future of the Left’s more eclectic, thoroughly underrated catalog. Steam is the best rock record of the year, if you care about such delineations, though if you removed that creaking genre tag from this sentence, I wouldn’t correct you.

That’s why I’m lacing up my boots. Why I’m cracking my knuckles, doing some healthy lunges.

For Falco, I’m going in.

“Upset Army,” as an opening salvo, girds my loins for the coming journey and no doubt would gird more than that if any other human bits were ever treated to a girding. A perfectly horrid guitar tone—everything I’ve ever dreamed of, in my sweating sleep—doesn’t try too hard here to disguise the type of intuitive, sticky melody on which Falkous has made his name, though his vocals will clear any fainting daisies from the field. Gnarled, impassioned, in-on-the-joke, not-joking-at-all, inviting, abrasive—it’s everything to me, this voice. Not to go sparkle-heart-emoji on you, but it’s difficult to overstate the life-giving, regenerative properties of Falco’s vox throughout Steam. It’s his strongest, most dynamic track-to-track performance yet, and “Upset Army’s” mode of “just gargled sulfur” is but one of many.

Take the record’s opposite bookend, closer “The Psychic Reader,” for a bit of contrast. Falkous has long been a secret balladeer—see also: “Fuck This Band,” “The Contrarian,” the jaw-dropping lyricism of “French Lessons”—and he knows the slower, softer tunes are where his compositional chops shine most brightly for those who can’t be bothered to listen to anything cranked up to 11. “The Psychic Reader” may be (and I realize I’m running low on my superlative allowance, but this is the best thing you’re reading right now), however quietly, his finest song in a career stuffed to the rafters with the little buggers.

He croons, he deadpans, he bellows low, he strains high. Most of the inimitable vocal hooks here—I count, what, a dozen?—are cloaked in a thin wash of distortion, lending them an appealingly melancholy air. “The Psychic Reader“’s climactic moment strips the fuzz away, Falkous harmonizing with himself in a triumphant, heart-stopping moment of release. I’ve gotten ahead of myself and forgotten to mention the interlocking, dueling Falco vox that build to that moment, call-response and contrapuntal or whatever other such critical jargon I’m supposed to keep at my beck and call—but I’m tired of the business, I told you, and even though this double-helix melody in the bridge lifts the song from Great to Classic, it still seems beyond me to tell you much of anything that would be better than listening to the fucking thing, which I implore you to do, right now. It’s what I’d like to be doing, were I not writing this review, but write this review I will—as I may have mentioned, for Falkous, I’ll go in.

And since I’m in with both feet now, let me just ask the question, though I know it shouldn’t matter, least of all to me and least of the least of all to Andrew Falkous, but these things wear on me as things do when you can’t convince yourself to stop insisting the world should be a fair and proper place, where good actions and good art are rewarded with due acclaim and due attention, whatever the nepotistic and in-crowd bullshit that surrounds Music Critic World like a forcefield smelling of its own farts and navel sweat:

Where the fuck are the reviews for this record?

Whether or not you’re enamored of Future of the Left’s past record or two (and I am), surely anyone who fancies him- or herself a critic of Loud Guitar Music would have to agree Falkous is one of the field’s most essential, worthy artists of the last twenty years? In other words, this is a major artist recording vibrant material, and Google turns up one paltry review? (Cheers to you, Sputnik, and jeers to me for thinking I’d never write those words.)

I’m not conspiratorially-minded (except I totally fucking am), so I’d be loathe to mention Pitchfork’s much-ballyhooed feud with Falkous over Ian Cohen’s lunkhead review of a previous record (and Falkous, by the way, would also like to put that business to bed, so shame on me), and I certainly would never stoop to indicting the majority of other publications on charges of Following the Boring Lead of One or Two Other Giant Publications and Reviewing the Same Cadre of Supposedly Independent Records Every Week Because Hey They Have Corporate Publicists and Friends in High Editorial Places and Falkous Released His Record By Himself on Bandcamp — I wouldn’t do that, but I have to wonder how a record so incredibly vital as Love Letters in the Age of Steam gets swept under the blogosphere’s filthy rug, even though we’ve known its author on first-name terms for years. I’m not mad—I’m disappointed, as my second grade teacher, Sister Doris, would say.

But the disappointment, in the end, should be theirs, not mine. Don’t let it be yours. Don’t deprive yourself of “3 Speed Limiters” and its Dischord-riffing postpunk chops, a rock’n’roll song through-and-through and one of the most thrilling in years, with its stunning, throat-searing finale; or the moment in “All Ghosts to Medicine Counter Four” when the guitar shifts into fifth gear, all tremolo picking and blood-boiling catharsis; or the manic, Tremors -sized earworm of Falco’s falsetto shriek in “The Good Sword”; or the Los Campesinos! drunksweat heavy-pop rush of “Who Is Iron God?” and its fist-pumping chorus; or the way “The Harder It Hits” blends skull-crushing crunch with bubblegum creepshow crooning; or how the restrained loveliness of “Standard Issue Grief” can coexist with the deliciously unhinged noise of “Middleyurt”; or how all of these songs are written by fucking Andrew Falkous, which means the lyrics—about trigger warnings, about outrage gamesmanship, about emotional ruin and emotional healing—are hilarious and insightful and, yeah, beautiful in the idiosyncratic way only he can deliver; or, or, or.

More than anything, don’t deprive yourself of one of those rare records, the kind that makes you glad to be alive in its company, that swallows your aggression and self-loathing and everyone-else-loathing and transforms it into something affirming, something funny, something powerful, something worthy. It’s a humble album from a humble musician, and for someone making the transformation from critic back to Just a Fan again, it’s the best possible gift I could get—a record to love, on its own terms, for its craftsmanship and its sheer, noisy joy. The same reason, I’d wager, Falkous made it in the first place.