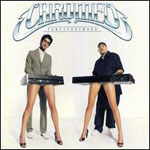 Like the spinner-obsessed low-riding Cassanovas that their name implies, Chromeo is to '80s music what Pimp My Ride is to cars. Like the delicious bubblegum of the Pipettes or the post-Prince aesthetic of Hot Chip, Chromeo is another in the booming market of pastiche-pop that resurrects old sounds through new interpretations, be they musical, lyrical, or just deeply ironic. Here we get a little bit of all three, with delicious synth beats and melody lines, hilarious and cheesy narratives, and a freakish obsession with the vocoder. Of course, Chromeo is also to music what Pimp My Ride is to television: easy, shiny, and largely empty of "substance" (whatever that is). But like watching Mad Mike put a giant subwoofer into someone's car, Fancy Footwork is ridiculous, fascinating, and wildly entertaining.

I once described Chromeo (duo Dave One and Pee Thug) to a friend as a white, less interesting Jamiroquai, but the comparison doesn't hold up, most obviously because the bands are tapping into different decades. Honestly, Dave and Pee's knowledge of 80s music is obsessively deep (much more so than mine), and rather than drop fake knowledge by simply rattling off track listings, I strongly encourage getting your hands on their twin 2006 mix tapes, Un Joli Mix Pour Toi and Ce Soir On Dance. They're both party-worthy assemblages of 80s records left for scrap in used record stores, cleaned up for the new millennium technostalgia. On Fancy Footwork, thankfully, they transfer their influences and knowledge as producers/DJs to their own output successfully, making the time between this and their 2004 debut seem worth the wait.

While nothing on the record is as mind-blowing as "Needy Girl" (could it be?), the album as a whole is much more polished and pop-oriented than their debut, where they seemed content to meander around a bit, exploring their sound, and hoping that would overcome the sloppy songwriting. Here potentially every song could be a single, with exception of the theatrical "Intro," where a chorus simply chants the name of the band. Narratively and stylistically, however, "Needy Girl" shows up in a rough sequel, album highlight "Opening Up (Ce Soir On Danse)." After the narrator lets us know that he and the Needy Girl have broken up, he goes on to describe the process of getting so involved in a relationship that monogamy seems okay--gasp!--even as it's associated with feminization ("She's got me crying at the movies"). The parenthetical title, a reference to the aforementioned mix tape, is apparently the name of the song's 90 second outro, complete with mumbled French.

This kind of cheezy Cassanova stuff has always been the perfect compliment to their synth-tastic production, and here the band shows ("maturity" is not the right word) development in making their shtick diverse and keeping it mildly interesting. "Momma's Boy" is sonically reminiscent of something more current and emo; it wouldn't have sounded out of place on the most recent effort by Hellogoodbye. It starts with a bouncy electric piano line, before breaking down with one of the few instances of straight-up guitar solo on the record. The song goes into weird territory with lovers who are romantically obsessed with their parents, and it's a refreshing and short number well-placed at two-thirds through the album. "My Girl Is Calling Me (A Liar)" describes working things out through tough times, and ends with a great spoken work bit where Dave calls Pee for advice. While it's a hilarious gag to have Pee use the vocoder even with his at-home telephone voice, it's evidence of the maniacal vocoder use that is evidence of the album's weaknesses.

Fancy Footwork ultimately suffers because Chromeo doesn't do enough legwork to keep their jokes, their personas, and their music adequately awesome over the course of a relatively brief 40 minute record. As much as I like the album, and see it as a hot 2-step in the right direction, I'm already anticipating the slew of remixes certain to follow. They seem to insist on remaining cheeky, and, at times, lazy, which is something that requires more chops and inventiveness to pull off. It's not a question of "intelligence" -- yes, Hot Chip is a "smarter" band, but Junior Boys are a "better" one. This album is damn fun, and warrants listens when smiles or breakdowns are in order. But soon enough, you'll change the channel.