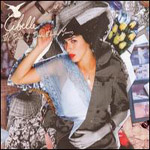 The Shine of Dried Electric Leaves

“Adding electronics” to music is a tricky business. The decision to do so entails, at best, an artist using different instruments than those to which their listeners have become accustomed in order to draw (and draw from) outside the boundaries of convention. Hopefully this means hitting upon something surprising, inspirational and helpful in conveying what the artist wants to convey. At worst, electronics are used as something with little value beyond that it is “now,” a contemporizing treatment to tired old clichés or an attempt to reinvigorate a career thought shot out behind the barn. ‘World Music,” oh most sticky of modifiers, complicates the relationship between traditional instrumentation and electronics even further by making problematic the parochial, anachronistic caricature of World Musicians often possessed by the genre’s North American listeners--the simple, pastoral person waiting on the side of the road for Ry Cooder to arrive, playing music pure and untouched by the trappings of commercialism for North American life.

But to admit that electronics breaks open the stereotype of World Musicians is to buy into the stereotype of electronics as music that is futuristic, even if it often attempts to mimic traditional instrumentation. Whether successful or unsuccessful at adding electronics to one’s music, doing so is still perceived by many as signifying a movement away from tradition, routine, and easily-recognizable styles, the effect being that one stereotype destroys, or is destroyed by, the other. Contradictory stereotypes cohabiting this way thus become fascinating, thought-provoking, ambiguous stuff. And here you thought this former MTV Brazil promoter had just put out a pop record.

Except here’s another contradiction: she has put out ‘just’ a pop record. And still, Cibelle, despite presenting a fairly rote (though perfectly nice) collection of acoustic ballads, comes off as more interesting than that. She taps into (or at least allows herself to be seen as tapping into) the marketeer’s idealization of the World Musician – traditional samba and bossa-nova melodies murmur pleasantly under sweet nothings about daydreaming, love, and daydreaming about love. But at the same time, on The Shine of Dried Electric Leaves, Cibelle adds electronics, a move replete with its own stereotypes. If anything, by adding that electronic element traditional sounds are supposed to be spliced with non-traditional ones, cut up and appropriated into something less recognizable. Electronics are supposed to be heavy on the concept, light on the pandering, aren’t they? That The Shine of Dried Electric Leaves does none of this means that either the stereotypes were wrong all along and that this is just a pop record, not at all conscious of these contradictory strains, or that the album now joins the likes of Bowie’s Earthling as a stumbling block on the road to reinvention or Bush’s The Science of Things as an attempt to spruce up what amounts to trash.

For all the easy pokes one can take at Cibelle, her album is confident and easy for a sophomore effort, if less than genre-busting. What initially plays like a self-consciously artistic step is fundamentally sustained by Cibelle’s quiet strums and hummed mix of Portuguese and English, a little (and just a little) more than dining room tourism. Featuring contributions from Devendra Banhart and Seu Jorge, The Shine of Dried Electric Leaves belies something behind its Starbucks veneer.

The album opens with Tom Waits-penned “Green Grass,” a song originally appearing on Real Gone. It features male vocals warbling and warm under Cibelle’s glossy overture. Less the dark horse or underbelly to Cibelle’s easily digestible melodies, the interplay is subtle and effective, a natural bass guitar that articulates where a bass dumbly emotes and infusing the song with some of the original’s gravel. While it’s unclear if the song was intended more as an opportunity for Waits to dabble in lazy samba or if its presence here is a standup for Cibelle’s credibility, there’s really no reason why it can’t be both. In either case, the voice’s presence doesn’t distract from a strong opener that is at once impersonal and endearing, with production so detailed you can hear Cibelle smiling in the way she pronounces “blossom.” Fortunately, for an album where the story will most likely be its guest stars, “Instante De Dois” and “Phoenix” follow “Green Grass” with impeccably warm production and the album’s first examples of successfully added electronics. “Phoenix,” which grows electric guitar chords about four minutes in, balances its organic and electronic textures particularly well. Though it’s difficult to distinguish where in “Phoenix” electronics are added instrumentation and where they are studio trickery, the song is still burnished to a laser-like focus.

Less successful is Devendra Banhart’s foray into this pseudo-adult contemporary territory on “London, London.” Where Cibelle uses her easy listening tendencies as a vehicle for her voice and some mild experimentation, Banhart presents a two-dimensional representation of himself, echoing Cibelle’s verses without a hint of his characteristic tremolo. When Cibelle laughs towards the end of the song, it may be a calculated moment too conveniently located to be entirely natural, but in this case the gesture is genre, and it doesn’t seem out of place. The moment does, however, conjure an embarrassed Banhart and explains, at least partially, why his glorious weirdness is nowhere to be heard. Less enjoyable still is “Mad Man Song,” which repeats a processed background vocal melody to death, needs a French spoken-word departure to break up its flat dynamics, and squanders an opportunity to add some raw personality to this heavily produced album.

The album’s quality also tapers off far too early and far too quickly, suddenly becoming lost in derivatives and rambling song structures. Tracks such as “Por Toda A Minha Vida” and “Esplendor (Refreshed)” recycle samba chord progressions introduced in “Green Grass” while “Flying High,” “Train Station” and “Lembra” meander pointlessly past the five minute mark. While the album’s top half is refreshing enough to excuse Cibelle’s lyrical sins, its longer, flatter second half finds itself emphasizing platitudes like “This life / I am feeling” in a way that deadens the excuse of Cibelle as guilty pleasure. The playfulness of “Arrête Lè, Menina,” featuring what may as well be a Seu Jorge sample rather than Seu Jorge, comes too late and is, again, too long to recover the listener’s interest.

Comparing Cibelle to Juana Molina is a problem: they’re both South American, and lumping them in the same category can seem as unfair as assuming that Canadians and Americans can get together over most things. But here, comparing the two’s style is useful. Cibelle could learn something from Molina’s confident minimalism, how her electronic swishes are less superfluous than essential, how they can complement her guitar and voice rather than mask it. Though The Shine of Dried Electric Leaves is interesting, thoughtful stuff if you want it to be, in the end it can’t help but crumble under the weight of its intentional artfulness.