1. Some Loud Thunder
2. Emily Jean Stock
3. Mama, Won’t Your Keep Those Castles In The Air
And Burning?
4. Love Song No. 7
5. Satan Said Dance
6. Upon Encountering The Crippled Elephant
7. Goodbye To Mother And The Cove
8. Arm And Hammer
9. Yankee Go Home
10. Underwater (You And
Me)
11.Five Easy Pieces 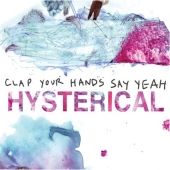 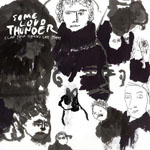 Hey, Axl: go fuck yourself! World: you suck, too. Stop making Chinese Democracy (Geffen; Never) an event, and stop falling ass backwards over the fact that someone can simultaneously rock the bandana-kilt and compose four perennial classics played on every modern rock station then and at every house party since. You know these songs. They will not let you forget that they exist. And although Clap Your Hands Say Yeah can be commended for racketing up a speedy follow-through to their eponymous' pent-up tension in traditional indie style, hearkening, maybe, back to those glory days when the Pixies were kicking out the space jams on a yearly basis, none of the material on Some Loud Thunder will make the grade for that upper echelon of safeguarded awesomeness.

I guess this is all somewhat obvious, but that debut did raise a coupla expectations from folks who didn't hate on principle. But besides the annoying (and ultimately inescapable) tactics of a retro-fried media that eulogises any band whose influences x, y & z add up to a certain lowest common denominator, that debut did showcase some palpable songwriting talent. The propulsive, unstoppable rush of songs like "Skin of My Yellow Country Teeth," where the yibber-yabber seesaw inflections of main man Alec Ounsworth perfectly mirrored a yo-yo guitar line that balanced precariously on a rhythm section that announced itself at every galloping snare -- these weren't mere mixtape fodder. These were legitimately fantastic songs in their own right.

Those songs pointed toward greater things, which is why it was probably wise for the band to cast a shadow over the creation of their sophomore effort. The press and hype have been markedly absent from Some Loud Thunder, which is, probably, a good thing. The impossibly restrictive criteria stickered onto every other recent major indie release ("This band will change your life," et al.) would have severely, and irredeemably pock-marked the group's career. Put simply, there are no "hits" here, and no real gimmick, now that we're all attuned to the atonal abstraction of Ounsworth's voice, for the big blogs to transmute into some "ready-made" confection with gender implications. It has terrible cover art. But aesthetics aside, that slightly arresting melange of black, white and grey with, I assume, the band's silent heads pencilled in, does, perhaps, get at the core mood of this record -- with the aforementioned heads, and slightly chaotic imagery, it acts as an Impressionistic counter to Revolver (1966).

The music attests: many have claimed Some Loud Thunder to be a "departure" record, which, as much as a sophomore record can be, it is. The difference is that whereas the Beatles started with a fairly conventional foundation that could be destroyed, deconstructed and revalidated while still retaining its core melodic flair, Clap Your Hands lacked that ingenuity to begin with. Their songwriting may have been great, but the material seemed to follow a lateral logic all its own, an amphetaminic clatter that gathered its innate theatricality and tension from the fact that it seemed to glide over nothing. It was the approach that dictated the air of the songs, and not the other way round. What the band have done on Some Loud Thunder is to reverse the formula in several different contexts, which forces one to assess the record on separate and different terms than its predecessor -- but careful not to praise dross for being different in a different way. Because there are some terrible songs on Some Loud Thunder, regardless of Dave Fridmann's intrusive and intermittently affecting production. Jaundiced, lethargic material like "Arm and Hammer," which aimlessly plucks chords out of thin air to fashion filler, sounds uncomfortable and out of place next to the clearly-articulated structure of "Yankee Go Home," the acerbic melody of which winds around some genuinely catchy vocal hooks, drawn out and mangled over a stilted beat that is the submerged and dark inverse double of the debut's blitzing charge.

The considered melancholy also permeates two of the record's best cuts - the horribly titled "Mama, Won't You Keep Those Castles in the Air and Burning?" and "Love Song No. 7." The former's subdued opening -- a one-way, sliding melody dissolving into a funereal bass rumble -- acutely conveys the wan longing that colours Ounsworth's morose lyrics: "Things are not as you would have them / I am no man and you're no woman." "Love Song No. 7," an odd-yet-prescient choice for first single considering the band's past efforts, works perfectly within the off-colour context of the record. Its baleful bashed piano chords encapsulate the dispirit that itself envelopes a mournful melody that seems to endlessly hang teetering over a void where "gravity's one thing." Fridmann's reverb-drenched production does well to further expand and express the difficult moods of these unlikely songs, and does even better on "Emily Jean Stock," whose bells, choral backing vocals and heavily-distorted drum fills make for engaging listening.

The instrumentation and approach taken on most of the good material generally works, with two glaring omissions. If "Satan Said Dance" is the great song that never was, a tectonic monolith of a rhythm ruined by technical gloops, then opener "Some Loud Thunder" is the inexplicable fuck-up: original studio recordings and live bootlegs marked this song out to be a future member of that immortal club of songs I was talking about a while back. Its serpentine, spinning guitar-lines and classic opening line ("So much talking / You'd think I'd have something to say.") lie at the crux of crossover culture, insinuating itself from the inside-out. Seriously, what the fuck. And the final recorded song plays out like it's gurgling between the bubbles of a vomit-strewn trashcan, with a deliberately sabotaged production job that distorts and bleeds every delicate, jigsaw facet of the song, from the interlocking sway of the instruments to its pointed lyrics, into one indistinguishable mush. It isn't really career suicide, as I suspect the same people who responded to the band's debut will claim, but it does point at a definite decision on the group's part, taking in mind also the non-existent publicity campaign, to shun and shirk off the expectations others have optimistically heaped on them. Some Loud Thunder is a mixed bag of spectacular material and hodge-podge studio doodles, but its critical success lies in how it disowns time-honoured indie machinations to allow the band to ditch the identity crises, and escape unhinged onto original terrain.