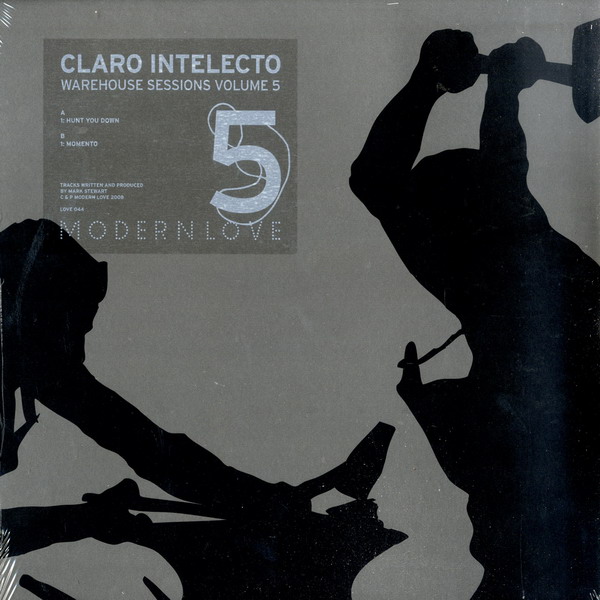 Hear that? That damp growl in between the pyrotechnic thud and tinkling ice of December 31st? That’s your first big hangover of the year; an anvil held up with wine and optimism whose thread is at almost full frey. Welcome to 2009, and get ready to get splatted. Everyone’s proclaiming we’re in 1973 (downturn, long hair, things blowing up in the East) so what’s to feel good about when your head’s already throbbing non-stop? Don’t ask me, but I managed to escape my own dangling anvils with the help of Mr. Claro Intelecto/Mark Stewart: a long-term purveyor of abyss-deep techno whose beats help to banish bad ecstasy. And by banish I really mean blot out slowly—Warehouse Sessions is the CD .zip file of thirty months of vinyl exclusives. See, like his labelmate and fellow dub renegade Andy Stott, Stewart knows the electric boffins’ secret ingredient: dice your ideas into limited twelve-inches, then concede to a final solvent that frees them from the grip of the decks.

Not that the trainspotters would class them as 100% his own ideas to begin with—opener “Thieves,” for example, flows out of a riff lifted straight from Underworld’s “Dark & Long.” But that’s cool, because this is dark and long. These are 1973 conditions, remember, and times is tight. Plus, like his native Manchester bad-asses who can ring a car in the time it takes most people to wash one, Stewart doesn’t so much appropriate as assimilate. His one crumb of piracy is swallowed and excused by those familiar dark visors, once again perfecting his knack for aiming calm recurring techno at people with half-lowered eyelids.

So, after “Thieves’” light laboratory dub, where else is there for us to go exactly? The consensus among the armchair spectators of the step/deep house scene is that you can’t do much with just a sub and a black bag of beats, so stick to the EPs and singles, dicknose. That’s kind of like saying you can’t draw with only a white piece of paper and a pencil, so over his next ten cuts Mr. Intelecto shows us why true blueprints come in one colour only. These slabs feel like secret devices put to test in the depths of the desert: sleek, subsonic dazzlers whose rumble could disintegrate Airwolf. Some hopeful pads get scissored by slow Casio on “Signals,” the whole thing keeping time to an imaginary game of Pong, while “Only Yesterday” takes a fermented bass line and adds the right amount of crunch and pastaschios. That’s what I love about this stuff that Modern Love get hold of: it’s music for aspiring spies; sleepers who implant subtle pellets which gradually help bring down the killing house. The hangar where Stewart sets up his machines is a huge and dusty sprawler, with the outer reaches of deep techno lit only by squiggling radars, the mood set for nocturnal daydreaming. Sometimes it’d be wise to stay awake, though: “Hunt You Down” gets a notch too dark for my liking, its guttural overdub implying a low-wave Satanism. Luckily there’s enough Proton Packs available to help combat those menacing entities, and I think my favourite comes in the form of CD exclusive “W6,” wisely omitted from the vinyl original for fear of pulverizing brickwork. I swear, the sub is so meaty on this one it could quench a cage of tigers, and its percussive tinges feel almost dwarfed in comparison, spread like pepper across an infinite t-bone.

When experienced on shuffle with the piano flecks and elastic kick of “Post,” you come to understand that this genre isn’t as set on tranquilizing clubbers as you might have first suspected. It’s more about exploring boundaries, about cross-referencing the peaks from Detroit and inner Berlin to spawn some dark and opulent troughs, steady enough to syncopate the shit out of a pack of sequencers while magnetizing every compass in town. To hold that thought for a whole hour might seem like a marathon at first—the murky glaciers of last year’s Metanarrative let us off after just forty minutes—but it took me less than the first track alone to realise that Warehouse Sessions offers bullion to the patient. To survive it is to become addicted, hungry for the next year of cryptic A-sides from these strange and grumbling all-nighters. If you can’t take the nitty gritty of the factory floor, though, you’re best off picking out a fresh pair of boating shoes while you wait for Office Sessions to drop.