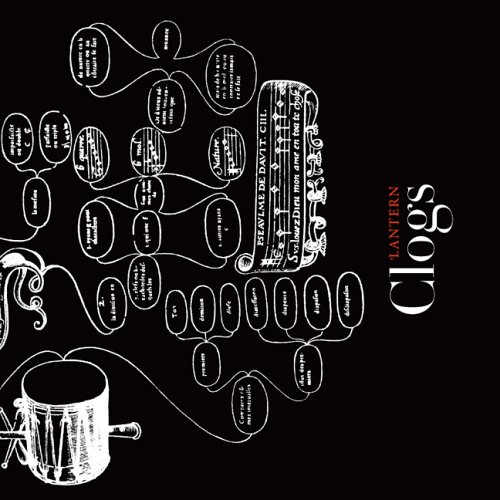 The Clogs are frequent stagemates with Rachel’s, Bell Orchestre and the Books, and they share similar palettes with Max Richter, Six Organs of Admittance and Johann Johannson. These groups (and others) don’t form a scene in the sense that they sound very similar; instead, they are united by their devotion to exploring folk, post-rock and quasi-classical themes within a pop format. While the Clogs’ albums often don’t pack the same immediate “oh, wow” punch of those of their peers, they are arguably the best of these groups at merging such seemingly divergent ideas into a conceptual whole.

Last year’s gorgeous _Stick Music saw them exploring the potential of percussion-based music. _Lantern isn’t quite as focused, but that makes sense. The former was a successful union of concept and technique, the sound of a band hitting its stride, while _Lantern shows a far more confident band taking the sound they’ve perfected and pushing it in new directions. The most noticeable difference is Thomas Kozumplik’s percussion; it’s less evident throughout, but his ability here to create perfect, sparse rhythms out of basically nothing is only more amazing given his full-out barrage on _Stick Music. Similarly, guitarist Bryce Dessner (of National fame) has slowed his rhythms down to match this more contemplative approach. The increased space allows Padma Newsome (viola) and Rachael Elliott (bassoon) to arch and swoon in ways they couldn’t before. Elliott’s thick lines hint at everything from cellos to harmonicas while Newsome runs through some of the prettiest melodies he’s written.

The Clogs have several tricks in their arsenal. “Canon,” a heaving chest cavity, unfolds through repetition, beginning with nothing more than a breathy guitar line anchored by thick floor toms. The space between the two is emphasized as other instruments begin to waft through their cracks; reeds alternate between groans and gasps, strings gather in long sighs but end in chokes, and a second guitar whispers accent notes that caress the original melody. These interlopers may seem random, but the original pattern is carefully altered through subtle shifts in key and tension. “The Song of the Cricket” begins in similar fashion: a simple guitar figure plays endlessly, its own cyclical figure a vibrant source of tension, as the other musicians frantically build around it. The song ends with a brief polka, poking fun at the tension that dissolved only moments before.

On their more immediate tracks, the Clogs create tension through the juxtaposition of melancholic melodies and nervous rhythm. “Death and the Maiden” hinges on a mid-song bass-breakdown; before the shift, the song is all shudders (Dessner’s guitar intro could easily be an _Alligator outtake), but after it becomes a violent exploration of thudding kicks and sharp bass notes surrounded by “Heroin”-style viola ambience. “Voisins” channels the group’s earlier work, its mock-classical reed line reframed in a thick cesspool of electric guitar and trilled snare. “2:3:5” has solemn beginnings and then its delayed guitar and steel drums begin to shuffle off into space. The viola is coy until its melody distends the glory notes of all our favorite pop songs into agonizing waves, from which the ghosts of famous conductors leak to perform their own symphonies on the periphery.

Whether sound scuttles though forest or factory, in the world of the Clogs, the idyllic and the decayed are the same thing. As a result, there is something incredibly real about the music that the Clogs produce. You can feel it breath on you. They capture and transform generic ideas about space and environment in ways beyond the grasp of most bands. Sadly, this approach limits their accessibility; even so, theirs is a world well worth, at least, a visit.