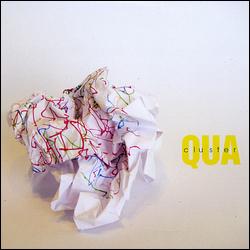 Yet another ancient, incalculably influential Krautrock group unleashes an attempted comeback, yet another gaping hole where there should be, at the very least, a few scattered paragraphs of historical reflection. If, say, Can came out with a new record people would be pontificating all over the place, and guaranteed that would suck balls. Where’s Julian Cope at, anyway?

There may be a reason for this: when reviewing the last Faust album, I suggested the band maintained their relevance because they always cut a zig-zagged path through various stylistic tangents, as opposed to a straight-line of progress and innovation. Cluster come from the other end of the spectrum, a studious group of sound engineers that were experimental in the strictest sense, given neither to the minimalist funk or pre-techno of Can or Kraftwerk, nor the soporific drones of Tangerine Dream. It’s not necessarily an affront, but Cluster have always seemed determined by the technology at their disposal: starting out with long, noisy musique concrète improvisations (under the name Kluster, before Conrad Schnitzler left the band in the hands of Dieter Moebius and Hans-Joachim Roedelius), then settling into far more composed, rhythmic terrain when electronics evolved to the point of abstraction, culminating in 1974’s Zuckerzeit. After that, they’re often credited with inventing ambient music with a pair of albums in collaboration with Brian Eno, a claim which I’m not interested in assessing, though it is worthwhile to note that the genre seemed to gain autonomy almost as a raison d’être for music which didn’t seek the immediate impact of rock music nor the direct exploration of specific musical properties that characterized most avant-garde schools.

From that perspective, it almost seems that bands like Cluster represented either a kind of reductive commercialism (you wouldn’t find a lot of people turned off by the Cluster/Eno albums, anyway) or a deliberate under-achievement (unwilling or unable to incorporate electronic instrumentation into rock music, still the chief facet which has made Krautrock such a hot indie reference point decades later). Add to this the fact that Cluster don’t have anything remotely as pretty as Music for Airports (1978). In reality albums like Zuckerzeit set an important precedent for warped electronic pop, their influence pouring directly into early-to-mid ’90s acts like the Orb, Aphex Twin, and Mouse on Mars. The latter being almost impossible to ignore with Qua, which could easily be mistaken for a lost link between Glam (1998) and Niun Niggung (2000). All of which isn’t to say that Qua is really boring, or ten years out of date, or that they’ve become derivative of the bands they initially influenced, only that it’s remarkably easy to overlook.

It’s also difficult to place in terms of development, both across the band’s career and the album itself. Having returned, in the last few decades, to side-long improvisations and obscure live documents, it seems strange that they would shift back into pop-like concision, as if plotting a second career arc that inevitably won’t be near as revelatory as the first. The other narrative-related issue is the fact that this concision, rather than representing an immaculate studio craft, makes the album seem like a series of sketches, each idea often lingering for only a minute or two before moving on to the next track.

Which isn’t to say some of those ideas aren’t fascinating. “Na Ernel” rides an odd time signature at the same time it seems more propulsive than anything else here, making good use of menacing industrial textures. “Flutful” is a wall of clanging percussion with an oddly languid synth melody flowing throughout as if unaware of the apocalypse behind it. But where these contrasts are occasionally pointed enough to be invigorating, often they feel strangled by the compositions. “Putoil” features what sounds like a ancient screen door squeaking with a morbidly-inhuman Casio backing it up along with about a dozen densely-packed drum loops. It’s a strange mix of simplicity and chaos, like a robot designed for infinitely complex tasks banging against a coffee table. It’s a funny image, but at this point the humour starts to become incidental to the music itself, as if the idea of weird contrasts was replacing the intuitive process whereby music actually becomes funny (or sad, or intense, or exuberant, or whatever). And while it may leave some room for discourse, the album seems to provide a platform for a debate about intention and artistic schemata without ever really confronting or interrogating these concepts.

Perhaps it’s the overwhelming neutrality. “Albtrec Com” is caught somewhere in between warm, burbly electronics and the desolate, industrial world of Autechre, pairing mechanical kettle drums with squiggly oscillations and bass fills covering every square inch of sonic space. The issue isn’t that it’s too harsh or mechanical, but that it’s caught somewhere in between earnest emotion and cold calculation. I’ve been enamored with albums that exude anonymity—see Quaristice (2008) or Selected Ambient Works II (1994)—but those albums manage to be inhuman in a way which holds a mirror up to technology, and thus somewhat paradoxically become illustrative of the struggle against alienation. Qua, while superficially similar, doesn’t even really begin to allow for this kind of interpretation.