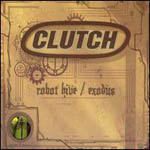 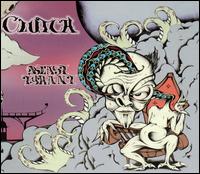 On behalf of Clutch fans everywhere, I feel like I need to apologize for the cover art on this record. While it’s no secret to the faithful that these guys smoke (or at least used to) their fair share of the sticky-icky, based off the artwork, I’d excuse you for thinking that Clutch were some abysmal prog-rock band on a micro-indie that takes out mail order ads in Guitar World. And it’s a cardboard digi-pack too, which I hate. The artwork on 2001’s Pure Rock Fury serves as a far better indicator of the heaviness this band is capable of; featuring Clutch looking extremely badass in an open field with storm clouds looming overhead. Cover art aside however, Blast Tyrant will do nothing to change the fact that twelve years after their inception, Clutch remain one of the most consistently excellent bands in modern metal, criminally under-appreciated outside of their cult fan base.

Clutch fucking rock. I realize that such a description is bereft of the hyperbole and endless witticism that music critic folk are expected to come up with, but there’s really no other way to describe them. I mean, sure, their sound features much use of the blues scale and borrows greatly from ’70s psych-metal bands like Black Sabbath and Vanilla Fudge, but guitarist Tim Sult uses his wah-pedal way more than Tony Iomni ever did, and Clutch have the considerably Dead-like habit of playing upwards of 200 shows a year, changing the setlist every night (heaven forbid Radiohead attempt this). Add an atypically agile rhythm section that swings like Buddy Rich, and the result is an unusually funky metal band that rocks extremely hard. Not “funky-metal” in the sense of a tattooed oaf hunched over slapping a 7-string bass, but funky meaning wah-drenched guitar leads and molasses thick dub basslines reminiscent of a faster Band of Gypsies (minus the Hendrix mastery of course).

Fallon has stated in recent interviews that a handful of songs on Blast Tyrant comprise some sort of loose story involving the characters “Worm Drink,” “La Curandera,” and a ship called “The Swollen Goat.” This won’t help to shake the unfortunate “stoner-rock” tag these guys always seem to get pegged with, but could help to explain the inclusion of more ridiculous artwork within the liner notes. At any rate, the first five songs on Blast Tyrant kick out the jams to the point where any semblance of a storyline becomes entirely secondary to the rock. Even more refreshing is the fact that Clutch treat the word “rock” like nobody since AC/DC, as prior records feature songs entitled “Rock and Roll Outlaw,” “Who Wants to Rock?” and they’ve even titled their website “pro-rock” dot com. Righteous!

However, I have the same problem with Blast Tyrant as I did with 2001’s Pure Rock Fury in that the opening barrage of songs kick so much ass that I’m reluctant to listen to the rest of the album. “The Regulator” and “Ghost” are acoustic slow-burners that offer a welcome reprieve from the onslaught, but at 15 tracks and nearly an hour, Blast Tyrant could’ve increased its potency with a little trimming. In Clutch’s defense, perhaps an overstuffed record is a way of making up for the fact that they’re a reluctant studio band, consistently waiting three years between records. But 1998’s The Elephant Riders was a tidy 10 songs, and yet I’d call that record as close as Clutch has come to a masterpiece; a Civil War themed 90’s metal record that I’d speak of in the same breath as Angel Dust and Aenema.

None of the songs on Blast Tyrant sound drastically different from one another, but manage to differentiate themselves via uniformly excellent choruses. Twelve years down the line, Neil Fallon has refined his redneck philosopher shtick to a tee, and while lines like “Ready to rock if ya wanna roll!/Please step away from the vehicle!” look completely silly on paper, you too will pump your fist when Fallon howls them over walls of feedback and Jean-Paul Gaster’s thunderous snare drum. The mixture of hilarity and rock power reaches its apex on swingin’ first single “The Mob Goes Wild,” an anti-establishment rant where Fallon not only suggests that “everybody move to Canada, smoke lots of pot!” but also clues you into the fact that “Condoleeza Rice is nice, but I prefer a-roni.”

Blast Tyrant could have benefited from being about fifteen minutes shorter, but it’s still an excellent effort that’s thankfully bereft of the lifeless sheen and processed angst that’s been recently draining the fun out of metal. Even more interesting is the fact that these guys somehow recorded it in Hoboken, New Jersey, a city that continues to produce excellent music despite being host to the cheesiest nightlife on the East Coast (trust me on this one). Although I might suggest that listeners unfamiliar with Clutch begin their collection with The Elephant Riders or the relatively recent Live at the Gogoplex, Blast Tyrant will certainly satisfy the faithful, and serves as an excellent addition to a solid body of work.