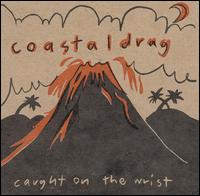 Caught on the Wrist EP

In my darkest moments, I wonder if there’s any kind of originality left in the entire world. I wonder if we’re all just kidding ourselves trying to make something new whether it’s in the field of music, film, painting, sculpture or writing. Is originality a romantic notion? Has every story been written? Has every new idea been realized? Are we doomed to merely deconstruct and reconstruct what’s been done before? Who was is that said there’s no such thing as original experience? Now, I’m not usually such a glum chap; in fact, I feel like there’s all sorts of places we haven’t been in the fifty or so shorts years that pop music has been around. While the other disciplines have their own problems to deal with (Is painting dead? Is the novel dead?), one of the things I love most about music is hearing something that’s never been recorded before. Honestly, I don’t think we’ve reached the end of the road as far as innovation in music is concerned.

That being said, Coastal Drag have cast their nets in the water where the leviathans known only as "Sebadoh," "Pavement," and "Weezer" are known to frequent. And yo, ho! They’ve caught a fairly catchy collection of tunes that pay relentless homage to those titans of lo-fi indie-rock. This disc is littered simple chord progression work that recalls the finest Lou Barlow and Rivers Coumo have to offer and, at times, the similarity to those bands gives one pause.

But, if you’re a fan of said titans, you'll find yourself enjoying at least some of this EP. "In Love With Palm Trees" opens the affair slowly, but builds up to a wacky freak-out, while "Idle Forever" will bring back misty eyed memories of that Golden Oldie "Say It Ain’t So." The most interesting thing about Coastal Drag is the way they stretch out and explore what were originally short and radio-friendly three minute-long tunes. In the capable hands of Coastal Drag the songs lilt, sag and explode in a frenzy of guitar riffery and clock in at about six minutes. Whether that’s enough to keep you listening to the Coastals rather than spinning your Sebadoh Greatest Hits Mix is really up to you, the listener.

The collection of songs on Caught in the Wrist recalls the halcyon days of indie-rock when melodic guitars jangled over simple drums and people wore lots of flannel. And there’s not a damn thing wrong with that. Just don’t listen to it on a day when you’re feeling sad about the state of innovation in music. Put it on ‘random’ next to Pinkerton, (1996), Bubble & Scrape (1993) and the Singles (1992) soundtrack and you’ll have a grand old time.