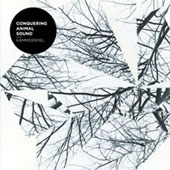 Initially bonding over a shared affection for Wu-Tang and Cocorosie during a “popular music” course at university, the duo comprising Conquering Animal Sound built their brand around a common aesthetic. And very little else. Stripped of the synths and drum machines upon which most ambient bands depend, Conquering Animal Sound manifests as an arte povera version of indietronica the Glasgow-based two-piece—Anneke Kampman and James Scott—fancy as “broketronica.” If that strikes you as a term and a band makeup that tread perilously close to “twee”...well, you’re right. But as I held my breath for the duration of the album: they tread only so close and no further.

Taking equal stock in songwriting, Kampman and Scott test and tinker with the limitations of found-object and often piecemeal instruments in their makeshift workspace, Kampan’s living room. (Which I imagine looks a lot like the Little Mermaid’s storehouse.) Holding a cozy communion with a collection of loop pedals, a laptop, Kaoss Pad, casio keyboards, rubbish reed organs, tape players, typewriters, and homemade drumkits, they milk the shit out of these, the humblest of the lo-fi, upstart band doo-dads, allowing their one financial splurge: a seriously bitchin’, cobalt blue harp.

With considerable moments of fascination, Kammerspiel is the innards of a curiosities cabinet fed through a thoroughly engaged loop pedal. Its unpredictable, organic elements are enmeshed in mechanical repetitions; sometimes an incisive strain of Kampman’s lyrics matures into hazier vocal layerings and drifting moments of warm, frothy distortion. Meanwhile, fragile plucks and peals of harp-strings are paired with a house-style bass beat and percussion gleaned from smashed Christmas ornaments.

While untamed by a recording studio or even by the limits of a beat machine they haven’t had to muster from scratch, Kammerspiel embraces a few, amiable pop basics. Track length, for instance, never seeks to swallow up more than three to four minutes at a time; it’s more assertively corralled than in their previously released mixtape, Your Friends, Conquering Animal Sound (2009), which took the form of a single, sprawling ambient soundscape. Or take a thing like the routine, repeat-heavy chorus/verse exchange with easily digestible, circular narrative movements—these are strewn so profusely throughout Scott’s plinking, cog-grinding beats and guitars that any formula in play goes practically unnoticed.

Operating with near as diverse a range as Scott’s ornamentations, Kampman’s vocals often come from no one perceivable source or direction, linger on no one coloration, phrasing, or tone for more than a moment. Sometimes she coats her voice in the snide, chin-thrusting stubbornness of a more touching Nelly Furtado, sometimes in the ethereal slightness of Ms. John Soda’s Stefanie Böhm—even employing both within the same space.

While the band might be unsure how or if their ramshackle sound can truly grasp and tame untamed wilds, Kampman lays down a few snares in the guise of some almost cruelly tender moments tweaked with malevolence. In “Wasp,” Kampman sings in intermittently sullen and plaintive hues through the swarming whispers: “Wasps fly into my mouth to die.” She decries her own mouth “the killing jar.” Her distinctive, Newsom-esque come-hither-slash-hostile quality in lines like “I am a meal for you / I am a meal for two” disrupts the sexual friction of a song like “Bear.” Without forfeiting the warmer glimmers of sensuality, they’re sharp lyrics constantly jerking a listener back from the brink of preciousness.

While the band never seems to, I occasionally grapple with piddly, superficial turn-offs. How about: that adorableness that just inevitably goes hand in hand with the sound of chimes, softer vocals, and wide-eyed, button-nosed kids in a room full of broken instruments? Not to mention their hoard of post-collegiate turn-on references, i.e. the German film era Kammerspiel name and even the band’s name itself, which is an homage to a relatively obscure 80s dub soundsystem group, Conquering Lion Sound. Still, they manage to just barely sidestep the twee genre and unwind otherwise pretentious methods with seriously substantial songwriting; it approaches something closer to craftwork than arts ‘n’ crafts.

Scrappily, Conquering Animal Sound use their hodgepodge noise to counteract their own impending cuteness with what I guess could be called savvy. They know how to take novelties and transform them into arresting surprises; they know how to create, in place of over-sentimentality, small instances of chaos laced throughout and blossoming within their structures. Theirs are songs jarring at the least expected times, songs of bite. Theirs are wolfish songs in twee’s clothing, with small, clear ferocities that turn to flash their teeth at any listener suspicions. These are songs that scare inaccuracies back into the woods.