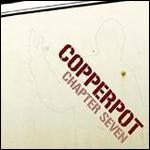 Copperpot is one Daniel Kuypers, Chicagoan, self-proclaimed international liaison and college dropout; by day he loses girlfriends and picks bankruptcy out from under his fingernails, by night he loses girlfriends and picks his fingernails out of bankruptcy’s plastic skin. Chapter 7, Copperpot’s debut full-length, chronicles enough financial woe to keep Dan from succumbing to a typical genre-reliable DJ party, and that in itself lends a refreshment to the record. “I’m definitely lovin’ what you got on the oven,” Akbar praises in “Fifteen Min.,” “break out the good silverware, the fine china, kid.”

Copperpot, who dropped the Chester from his name, does operate like a violent chef, albeit someone along the lines of another Simpsons character/greasy stereotype Luigi: expect the spaghetti and watch as he bites his lip when Fat Tony rejects the plate. Although the ingredients of 7 work flawlessly in sync, fed into the mix in a marvelous order, DJ ‘pot lashes out too predictably at the love-it-or-leave-it extremes of economic ballyhoo. Which isn’t to say that hip hop needs more money-grubbing Birdmen, but tracks like “Interlude - Get It On Credit” and “It’s a Rap” seem too easy.

Regardless, Chapter 7 is impressive. “Intro” sets a lazy chocolate frosting over the following seventeen cuts, quickly establishing Dan’s penchant for manic cymbals, flat snares thickened with stuffed bass, and intoxicating lounge melodies. “Dreams” splits LongShot’s breathless assonance-fest in two with a slinky cello, continuing the instrument’s melody by way of vibes and choppy guitar. “It’s Evident” demonstrates wit with the break as the beat moves on little more than submerged bass, a sprinkling of cymbals and flamenco arpeggios worked in between Iomos Marad’s contradictory flow. The spare background betrays Marad’s confusion over one MC’s artistic responsibility; his jittery delivery and shifty philosophies rub their naked parts against Copperpot’s upholstery in all the right ways.

The true darlings of the album, though, are UK label Lowlife’s rappers. EV, a deft and solid hip hop label out of Evanston, Illinois, has an exclusive US distribution deal with Lowlife, and the deal, by this album’s standards alone, is gold. Braintax spins sticky rhymes about nostalgia for Chuck D and admits no patience for the general shift from militant conscience to militant gaudiness in his fellow heads. “One guy I know spends his life looking for wax/ so I quiz him on a whole bunch of made-up tracks./ Be like, ‘What, you don’t have that record?’ I laugh loud,/ Because I’m a cynic for a living and I’m not that proud,” he caws through a simple trigger and synth bap. Next come Verb T and Kashmere who wring the cataclysms out of gangsta machismo. A tricky feat over Dan’s languid “Headtrip.”

Unfortunately, Chapter 7’s weakest songs fall prey to dry concepts and drier MCs. Edo.G, wasting a playful arrangement, continues to bore the shit out of us with his new moniker. Besides his first crass couplet, Bamski slouches into lame dis rhymes with the harpsichord-laden “Mflue,” and Profound, a staple on the LP, doesn’t do better for the pick-up. Much can be blamed on the lyricist, as Copperpot can make even the clumsiest deliveries bearable, but the enormous amount of collaborations here beg for more discerning choices in the producer. Even a weathered chef has to squeeze the fruit more than once.

Copperpot unleashes a steep order for his debut, and the heady stew almost hits the mark. Answering machine messages, idol worship, and an unnerving Mike Tyson’s Punch-Out remix add struggling lulls to an otherwise surprising diversity. So, even though “The Professional” sounds like De La Soul and Czar smells like a tangerine in DJ Quik’s crisper, the bass is gooey, the scratching is wild, and the mass is lovingly honest.