Other Records by Cornelius 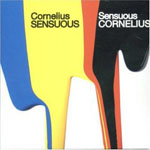 Endless porcelain expanses of white lash the retina. The Earth is visually equalised; minimised into nothing but empty space: silence and sterile surface. Covered metal and mercury begin to shift in unison, tape spools out then back in rings of black ribbon as dim memories ignite under a sheet of mechanical precision. Synthesised keys and strings are methodically combined in a melee of thunk and draaang; the fight coalescing into gentle harmony as its elements firstly slot, then progress into a gauzy shimmer. Simple echoes of the past, swimming out into the ether like hot breath exhaled into chilled night air.

Yeah, so the science fiction angle is a little obvious, but it's not exactly something you can avoid when coming to terms with the new Cornelius album. Its heart is strung with artificial recollections of musical history beamed from a bright future; recollections that intrinsically instruct the mind in the methods of a more precise, focused sphere. Seemingly created by an inquisitive, yet rigidly structured consciousness, these songs press sleek chrome fingers into a rich pulp of synthpop, funk and ambient. The sound is correct, but the feel is harder, the swing more difficult to replicate with metal and machine. There's no warm blood in these veins, only strings of binary. It is, however, a cipher that seeks to comfort, information that desires pleasure and life.

The structure of the album is key to its balance, tempering decaying funk and synth workouts with dappled pools of ambient calm. Opening track "Sensuous" bathes in a soft morning shadow, its wet dewy droplets suspended in a drowsy haze; the tone of tranquillity and solitude serving as a palette cleanser for the subsequent sequence. Beginning with the minimal, dry funk of "Fit Song," Cornelius sets up a run of A.I. pop that takes in Altzheimatic Hall & Oates synths ("Breezin"), punk mathematics ("Gum") and acoustics riddled with syntax errors ("Scum"). It's a string that seems focused, yet childlike; technology at play in a steel showcase. His appropriations of songs past -- the electronic rush of Kool N The Gang's "Summer Madness" at play in the wires of "Fit Song" -- seem like ghost signals. Looming like a patient father over his machines, Cornelius lays his vocal lines gently and steadily across the measured mass of electronics. Presented as yet another mechanical recreation, the majority of his vocals are phased or clipped, sounding almost instructional in their simplicity.

The final four songs latch onto a more hypnotic groove than the preceding tracks. "Beep It" welcomes synths that throb and pulsate in ever-widening patterns, expanding and illuminating like overloaded cores. It brings to mind the work of British artist David Whitaker's shifting, glowing utilization of lines and color, spinning off smaller shapes to create conflicting gyres of pattern. This feeling of surging color is also discernible in the watery choral rush running through "Like A Rolling Stone"; its sense of pressure eerily wedded to a hollow ringing rhythm, like the sound of fingers tapping inside a metal bowl. Cornelius' sense of drive evaporates with "Sleep Warm," perhaps the album's strangest approximation, which plays on a sepia-toned lullaby melody wound by Cornelius' rich, comforting vocal. It's a delicate, optimistic piece that suggests the soporific music used to accompany sleeping children in the Hollywood movies of the '20s and '30s annexed to soothe the tired automaton.

Sensuous is more fragmented and eccentric collection than Cornelius' previous effort, 2002's Point. The elements here coalesce into a work rife with contradictions: playful yet studious, futuristic yet nostalgic, clinical yet warm. The form and composition of Sensuous suggests a stern inquisition of sound; a machine's attempt to reconstruct a past musical language using the bare elements of a handful of half-remembered genres. While undoubtedly charming in it's naivety, it also feels slight and transitional, filled with a sense of thin momentary distraction. Like a colouring book, it's at once full of promise and empty, giving back only what the listener is willing to invest.