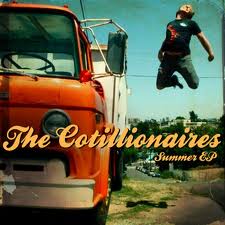 “It’s goodtime party music,” said Joe matter-of-factly, and took another bite from his taco al pastor. He contemplated his answer for a few beats, zoning out to Univision on the TV precariously mounted to a post above our picnic table, then decided he was satisfied with both his taco and his answer. “Bingo.” he said. “Get ready to party.”

But even if Joe wasn’t a natural born hypeman, five years in L.A. hustling his comedic wares would have done the trick. He says this kind of shit all the time. The words “goodtime” and “party” are ever-present on his lips. He’ll almost never admit that something he’s chosen to do isn’t going to be a good time. If Joe’s in on it then the shit’s poppin’ off. At least that’s the impression you’d invariably get if you were talking to Joe at a late night taco stand on your way to see a few of his friends play a show under the aristocratic moniker the Cotillionaires.

Not that Joe’s usually wrong, we have many good times, although he is possessed of that lackluster stoner optimism that needs only sufficient levels of narcotic alteration to convert any old activity into a “goodtime party.” It would be fair to number Joe among the apostles of the Weed Panacea. Which is why, in this context, “goodtime party music” doesn’t give me a whole lot to go on. So I shove my followup questions back down into my pockets and return my focus to my own tacos. I’ll just have to decide for myself when we get there.

The venue is an East L.A. art studio called the Strange, replete with photos of naked blood-soaked women on the wall and a mission statement. Surly hipsters sell cans of Simpler Times, the Trader Joe’s beer, out of a refrigerator in a pitch black corner of the cavernous gallery space. A willowy singer-songwriter is finishing up an electric set on the low platform used for a stage. The hipsters run out of beer. They hurry out the door to the Trader Joe’s down the block as the Cotillionaires take the stage, saying something about how all of their songs are essentially about love. This is, of course, a statement that every band on the planet could accurately make. Still I have nothing to go on.

Then, as they reel off a short set comprised of the handful of tracks making up their self-released Summer EP, I realize that Joe’s description of this group’s sound was not, as I had assumed, an affable generalization. I mean, he was so spot on that maybe he should be writing this review. Goodtime party music is exactly what the Cotillionaires play. Consciously unambitious, deliberately catchy, wise-assed burners, one after another after another, like the cadence of the rager in the apartment upstairs. The sound of people jumping, dancing, about to come through the roof.

Lyrically, the Summer EP is, and probably should be, simple fare. “I want to eat lightning and I never want to die,” goes the refrain of, “Eat Lightning,” a song that pauses its anthemic churn to flirt with gravity through the juxtaposition of the plain-faced admission “We’re getting old.” Musically, however, the Cotillionaires boast a pleasing variety. The Summer EP essentially amounts to a small collection of genre exercises (“Up on Love” and “Otis Redding,” for example, owe sizable debts to soul) united only by the twin threads of bitchin’ guitar riffs and infectiousness; an infectiousness bred of a practiced understanding of the alchemy by which a goodtime party is incubated and hatched.

What made that show—and what makes most of the cuts off of this EP—so effective is what the Cotillionaires know about goodtime party music: it must begin on the stage. Every member of this band is an actor or comedian. Of course they are. I mean, this is L.A. The point is, though, they’re all performers, and as performers they grasp that in order for people to really enjoy the music they’re making it needs to have an innate experiential quality. With goodtime party music the audience needs to feel like they are, in some way, a part of the performance.

But here’s the thing about creating that environment: you can’t leave it to the audience to provide that spark. The lead singer of We March, a hardcore band I used to love in college, would, on occasion, begin his show by walking into the crowd and punching an audience member in the face. I’m here to tell you, that turned a performance into an experience real quick, as the audience mobbed him while he roared unintelligible lyrics. The Cotillionaires aren’t assaulting concert-goers, but they know that if the audience sees, or the listener hears, a goodtime party happening they’re not just going to stand around. They’re going to participate and the goodtime party will get bigger and more goodtimey.

Which is why the downtempo jam “Otis Redding,” though aptly named, doesn’t translate to Summer quite flawlessly when deprived of the context of the live show. It’s also why “Friends,” a snot-nosed punk contemplation on the joys of friendship loses none of its considerable punch in the trip from stage to album. Friends eat homemade cookies with you, they help you fly your red balloons, they talk about your “heartache hurties.”

So, yeah, goodtime party music. Joe nailed it on the head. I’ve called this music unambitious, and it is, but I don’t mean that as a pejorative. It’s just that sometimes when you hear a band play it sounds like they’re playing for themselves. They’re playing for fun, and if you happen to be listening, all the better. There’s not much ambition in that. But if they can make you forget, however briefly, that music’s supposed to be played for any other reason, then they’ve hit a valuable mark.