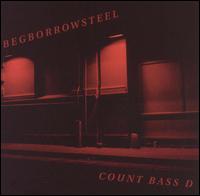 Dwight Farrell, true Ohio playa, after debuting on Sony in ‘95 and dropping the Dwight Spitz album on High Times in ‘02, inaugurates the decade of his recording career with his third “full-length” release, and it’s on Ramp Recordings. It’s called Begborrowsteel. It’s less than half an hour of simple, funky hip-hop in 16 tracks. This is the review, written in real-time as the disc plays over headphones.

“Bullets Hit Brains” introduces a dialogue and a blinging key line that grows into the excellent “Doxology” that’s over before it can even be enjoyed. “The Mingus Sextet” throws a woman’s pants and groans over a cheesy beat that’ll get heads bothered before Dwight cools them down a bit. “Nina and Weldon” continues the come-on. That’s not even four minutes, and “Gimmie a Gig” comes in with a beautiful, fluttering bass line that disappears after 32 seconds. Count Bass D will not linger on his most satisfying musical hits.

A minute and a half of “Drug Abusage” trips by, and the Count’s on instrumental ground with the swelling strings of “Kumbuka Watu Penda”… can’t even finish typing the song title before it’s warbled out into Part 2, where a scratch of “Remember, that the niggas like dope” brings back Count’s sharp spitting with instructions on how to live.

“Des Fausses Impressions” takes bossa nova and Serge Gainsbourg on a ride, then “Dollar Bill” has raspy vocal cut-ups and scratches and a short bass line flashing with a synth wash and Count Bass D rap. At three and a half minutes, “Down Easy” is the album’s first single and also happens to feel like the first proper song. The beat’s a twisted R&B clinker with swishing drums and watery treble; Dwight tries to sing sweetly in his wooing, but his voice’s more attractive when it’s flowing.

Sounding like something off The Return of Jack Splash or The Love Below, “New Edition Karaoke” circulates chipmunk vocals over blurping keyboard bass and sound effects. “Low Batteries” winds down music and vocals in the drawling distortion of a tape player giving out, and then “No. 3 Pencil” chimes in with bright keys and horns and understated drums, recalling the work of M.F. Doom all the more with Count Bass D’s heavy voice on top.

“Body by Jake” punctuates a quick flute sample with drum hits straight from ’88 and a revving electric guitar. The album concludes with the whistling, wheezing, humming, sputtering synthesize-and-scratch jam that is “Canerow Waltz,” the sound of Dwight Farrell becoming Neu.

Then it’s over. Just like that. Shit was kind of nice… a hip-hop daydream from a talented producer/rapper…barely there and quickly gone.