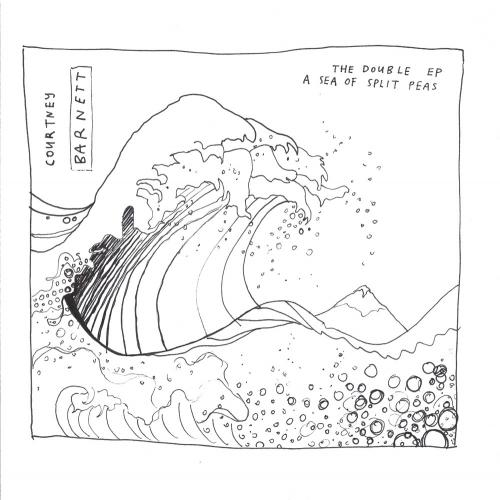 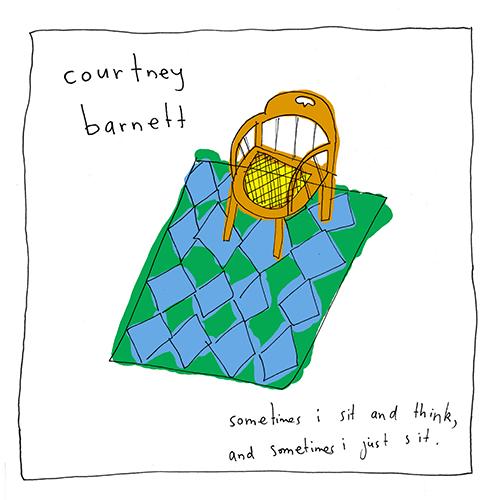 “Put me on a pedestal and I’ll only disappoint you,” Courtney Barnett sings in the chorus of “Pedestrian at Best,” the lead single from her debut full-length, Sometimes I Sit and Think, and Sometimes I Just Sit. It’s a sentiment that runs through the record, and one familiar to fans of Barnett’s equally self-effacing debut EPs, released as the combined A Sea of Split Peas in 2013. Sometimes I Sit and Think wears its modesty on its sleeve, with a focus on the mundane moments of life. Sometimes, like the record’s title, these moments illuminate something, a deeper truth or beauty or irony. Other times, they’re just moments, and in her wry, clever voice, Barnett lays them on us with a raised eyebrow. She is a powerful presence in each song, and it’s her point of view, rendered with such specificity, that makes Sometimes I Sit and Think more than just your average indie rock record.

My first introduction to Courtney Barnett was the same as most: “Avant Gardener,” her breakout single and the roller-coaster tale of a panic attack in a garden on a hot Melbourne day. “Avant Gardener” is a great song not because of the story itself but because of the telling: it’s a five-minute tale with character details, a beginning, middle, and end, and the narrator has a real personality and a way with a joke. A song like that is not an easy feat, but Barnett manages a few more on Sometimes I Sit and Think—songs so sharp that they, perhaps unfairly, outshine its other, perfectly enjoyable but more traditional rock songs.

When she hits her stride, Barnett as a lyricist is similar to Eleanor Friedberger or Jens Lekman, artists who are all about words tumbling over words, somehow still incisive enough to break your heart. The music on Sometimes I Sit and Think is not the focus—these are standard indie rock guitars, ranging from punk-adjacent to acoustic balladry. At times, Barnett’s melodies channel the ‘90s sound of Liz Phair (“Nobody Cares if You Don’t Go to the Party,” “Debbie Downer”) or Blur (“Dead Fox,” “Boxing Day Blues”), and “Pedestrian at Best” is notable for its punk energy. But it’s Barnett’s slightly rough, drawling voice, and her words, that are the record’s rightful centerpiece.

The “Avant Gardener” of Sometimes I Sit and Think is “Depreston,” the record’s most fully realized song, and one that manages to be specific and bleakly humorous while connecting to larger themes. It’s about that soul-crushing experience of looking at a house in the suburbs, in this case “a deceased estate” (“…aren’t the pressed metal ceilings great?”). The song is straightforward jangle-pop, juxtaposing the perky language of realtors with the reality of the situation: looking to buy a home that still bears the emotional weight of its prior inhabitant. Barnett sings, “Then I see the handrail in the shower / A collection of those canisters for coffee, tea, and flour / And a photo of a young man in a van in Vietnam / And I can’t think of floorboards anymore / Whether the front door faces south or north.” It’s the most emotionally resonant song on the record, despite the fact that it begins with idle discussion of percolators vs. coffee shops, and ends with the refrain “If you’ve got a spare half a million / You could knock it down and start rebuilding.” It’s smart and subtle, and it’s a perfect example of the way Barnett’s focus on small details, when astutely employed, can turn a good song into a great one.

“Depreston” is the record’s saddest, slowest song—though the burnt-out psychedelia of “Kim’s Caravan” comes in second—which may be why its language hits so hard. But there are other great moments on Sometimes I Sit and Think, like “Dead Fox,” a stream-of-consciousness song that finds Barnett driving on the highway, thinking about dead animals and the meat industry and the profligacy of car culture: “Heading down the Highway Hume somewhere at the end of June / Taxidermied kangaroos are littered on the shoulders / A possum Jackson Pollock is painted in the tar.” Another highlight, “An Illustration of Loneliness (Sleepless in New York),” pulls off the same neat trick as “Depreston,” interspersing heartbreak with details meant to distract. The result is a narrator, and a way of expressing emotion, that feels very true, not laid bare but rather couched in the ordinary. “I lay awake at four, staring at the wall,” Barnett rambles, “…I pretend the plaster is the skin on my palms / And the cracks are representative of what is going on / I lose a breath…my love-line seems entwined with death.”

As the title implies, not all of Sometimes I Sit and Think, and Sometimes I Just Sit is fully of startling, astute moments like these. But it’s an incredibly engaging debut nonetheless, and one in which Barnett defines her voice in a way that feels effortless. Despite all her modesty and uncertainty, Barnett knows herself as a writer, and stays true to herself the whole way through. If this record has a theme, it is stray words and stray thoughts—those distracting strands that break in. Occasionally, sure, they take us off on meaningless tangents. But more often than not, they tell us truths about our surroundings, our experiences, and ourselves.